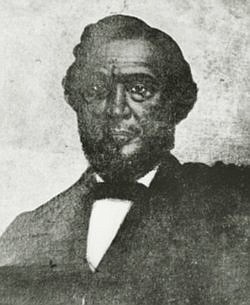 Among radical abolitionist John Brown’s most trusted supporters and benefactors was the Rev. Dr. James Gloucester. Last week in these pages we featured his phenomenal wife, Elizabeth, who was at one time considered one the wealthiest Black women in America. Obviously, the good reverend was not absent in his wife’s acquisition of property and prosperity.

There was clearly a division of labor in this provident household, and while she managed the family’s businesses, Rev. Gloucester kept their religious affairs in order, though both were extremely active in the abolitionist movement. As we shall see the business ventures became highly contested after Elizabeth’s death.

James was born in 1810 in Philadelphia, and was one of five children by the Rev. John and Rhoda Gloucester. Like his father, James was a pastor and the founder of Siloam Baptist Church in Brooklyn. It was one of the new independent Black churches being organized in the borough in the first half of the 19th century. In 1822, the same year of his death, public schools opened in the city for Blacks.

As we noted in the profile of Elizabeth, the Gloucesters were strong advocates of John Brown’s plans and unlike too many of his followers, did not end their allegiance to his cause even as it became more perilous by the time of his raid on Harpers Ferry. They provided him with some of the funds he needed and opened their home to his temporary stay in Brooklyn. Theirs was a trusted relationship but there is little else to report about it other than that visit in the late 1850s. They certainly had a reputation as conductors on the Underground Railroad.

For the next thirty years or so, the couple was a model family with no appearance of differences or conflict. But when Elizabeth died in 1883 things went awry and the turbulence and discord arrived staining what had been an enviable coexistence.

By the time of Elizabeth’s death, James was no longer the pastor at Siloam, and was making a living as an herbalist. Problems arose when Elizabeth’s will disclosed that she had bequeathed her properties to her six children. James retained an attorney and contested the will, declaring that she had been under pressure at the time she wrote the will and that he was the main source of the wealth. He claimed that Elizabeth used his money to acquire all the real estate and property, putting all the transactions in her name. The only resolution resided in probate court. One of the executors of the properties in trust was the renowned Dr. James McCune Smith. Dr. Smith, along with the co-executor, an attorney, was asked to divide the estate into seven parts to be shared by James and his children. There was not only a complication that after James’s death his property would be divided among his children, things got even more convoluted when one of the children had been dropped from the will, which led her to contest the will as well.

Much of the case impinged on whether James was a rightful partner during the couple’s accumulation of the wealth. The dispute raged in the court and was finally settled, allowing James a lion’s share of the estate with the children compromising on the case. Key to the settlement was the Remsen House that Elizabeth had run, and the children assumed this duty until it was sold back to the Hamilton Club from which it originated.

The settlement may have favored James but misfortune dogged him thereafter, particularly in his future investments and various real estate ventures.

When he died in 1890 at Remsen House he was 79 or 80, and his daughters were in attendance. Like his wife, he succumbed to pneumonia. The messy probate affair had sullied what had been a rather distinguished career, highlighted by his participation in religious affairs and the abolitionist movement. He is buried near his wife in Green-Wood Cemetery in Brooklyn.

In the remaining space, rather than pursue further James’s disappointments, will be given to his father the Rev. John Gloucester, who was born in slavery and became one of the real pioneers in the Presbyterian Church in Philadelphia. At the crux of his remarkable life is the courage and determination he displayed in rescuing his wife and children from slavery. (It should be noted that James was born in Philadelphia and not in slavery like his older siblings.)

From 1810 to his death in 1822, John was a stalwart in the Philadelphia community, his sermons imbued with the moral turpitude that he passed on to his children, at least in the early years of their lives. His life, like his resume, is often obscured, but he was the first African American to attend Greenville College in Tennessee, where his former owner was a trustee. With a strong sense of purpose and devotion he built his church and nourished his congregation with an uplifting gospel, inspiring many of them to participate in making Philadelphia a noble community of African Americans. Whether in Brooklyn or Philadelphia, the Gloucester family has left a memorable mark.