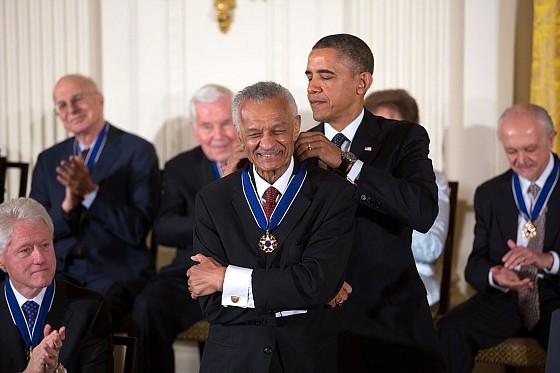 Vivian’s daughter, Denise Morse, confirmed her father’s death and told Atlanta’s NBC affiliate WXIA that he was “one of the most wonderful men who ever walked the earth.”

Vivian reportedly suffered a stroke earlier this year, but his family said he died of natural causes.

“He has always been one of the people who had the most insight, wisdom, integrity, and dedication,” said former Atlanta Mayor Andrew Young, a contemporary of Vivian who also worked alongside King.

“Rev. Vivian, like Martin Luther King, Jr, and Joseph Lowery was a visionary theologian, genius, and a leading force in the tactical and strategic planning of effective nonviolent civil disobedience demonstrations. C.T. has passed the eternal baton to a new generation of civil rights agitators and organizers. ”

In a statement emailed to BlackPressUSA, the NBA’s Atlanta Hawks expressed their condolences.

“The Atlanta Hawks organization is deeply saddened by the passing of Civil Rights Movement leader, minister, and author, Dr. Cordy Tindell “C.T.” Vivian. The City of Atlanta and the entire world has lost a distinguished icon whose leadership pushed the United States to greater justice and racial equality for African Americans,” team officials wrote in the email.

“To inspire the next generation, Vivian founded the C.T. Vivian Leadership Institute in Atlanta, with the intent to create a model of leadership culture in the city that would be dedicated to the development and sustainability of our communities.”

“Vivian also started Basic Diversity, one of the nation’s first diversity consulting firms, now led by his son, Al, who has been a great partner to our organization. We are grateful for Dr. Vivian’s many years of devotion to Atlanta and thankful that we had the opportunity to honor and share his legacy with our fans. The entire Hawks organization extends its most sincere condolences to the grieving family.”

Rev. Vivan was active in sit-in protests in Peoria, Illinois, in the 1940s, and met King during the 1955 Montgomery bus boycott — a demonstration spurred by Rosa Parks’ refusal to give up her seat to a white rider. The 13-month mass protest drew international attention.

Rev. Vivian went on to become an active early member of the group that eventually became the Southern Christian Leadership Conference, according to his biography.

Like King, Vivian was committed to the belief that nonviolent protests could carry the day.

“Some thoughts on the Reverend C.T. Vivian, a pioneer who pulled America closer to our founding ideals and a friend I will miss greatly,” Former President Barack Obama wrote in a statement. “We’ve lost a founder of modern America, a pioneer who shrunk the gap between reality and our constitutional ideals of equality and freedom.”

Rev. Vivian was born in Boonville, Missouri, on July 30, 1924. He and his late wife, Octavia Geans Vivian, had six children.