Artistic community to hold ‘While We Breathe’ benefit July 29 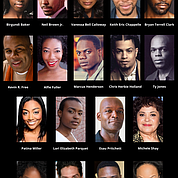 "While We Beathe" cast

Members of the artistic community are coming together on Wednesday, July 29, at 9 p.m. EDT/6 p.m. PDT on www.whilewebreathe.com and Youtube Live to use their talents to create original works to address this historical time in our country, in a program called “#WhileWeBreathe: A Night of Creative Protest.” Produced by Broadway producers Brian Moreland and Arvind Ethan David, the online performance event will benefit The NAACP Legal Defense and Educational Fund, Inc; The Bail Project; Black Organizing For Leadership And Dignity (BOLD); BYP100 Education Fund; Forced Trajectory Project (FTP); The Justice Committee; and SONG.

“The quality of this company, and the power of their work, speaks to the depth of talent in the BIPOC creative community and to a shared understanding of the importance of this moment. We can’t wait to share what we’ve made with the world and to raise funds and attention for the cause,” said Moreland and David.

Donations can be made at secure.actblue.com/donate/ldf_wwb. There will be an after-show discussion at 10 p.m. EDT/7 p.m. PDT hosted by Emmy-winning journalist Michelle Miller.