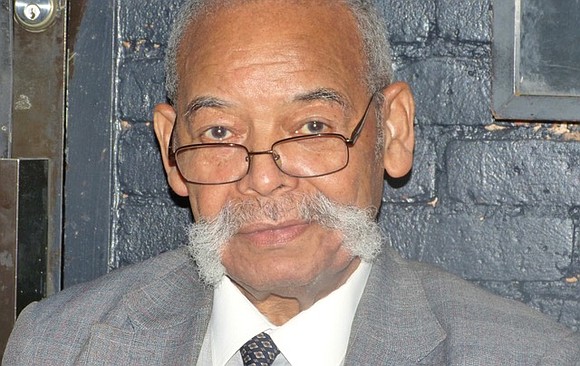 NAT WHITE, a renowned New York City jazz promoter, who’s been presenting outstanding jazz shows since the 1960s and for the past 12 years presented a Sunday Jazz Series, died on July 6, at his home in Warminster, Penn. He was 90.

A cause of death was not available at the time, noted his good friend of 45 years Arnie Perez. Recently, Perez and White celebrated their 12th anniversary as partners and founders of VTY Jazz, a jazz promotion company that presented some of the best jazz shows in New York City under their banner Sunday Serenade series.

The series began at Bassline in Mt. Vernon and had a few homes that included St. Phillips Church in Harlem and the West End Lounge on Manhattan’s Upper Westside before settling in at the celebrated jazz club Zinc Bar in Greenwich Village (in 2019). Over the years the jazz duo presented such prominent jazz musicians as Billy Harper, Harold Mabern, Eric Alexander, Carl Allen, Gerald Cannon, Mark Whitfield, Dwayne Eubanks, David Hazeltine Quartet, and Jeremy Pelt.

When White wasn’t hanging out in a jazz club or presenting his own shows, he could be found at the Palladium dancing to the Latin sounds of Tito Puente or Eddie Palmieri. White loved Latin music and made it a point to always be around that sound. Could have something to do with being a native New Yorker and living in Harlem for many years.

Nathaniel “Nat” White was born in Queens on May 26, 1930 to Nathaniel White and Dorothy Parker White. He attended Cardinal Haynes High School in the Bronx and later received his GED. White worked at various jobs as a young man including cab driver and U.S. postal worker before landing a position with the NYC MTA where he retired in 2019. Shortly following his retirement, he and his wife moved to Warminster, Penn. to be closer to their daughter and grandchild.

“Nat was a good friend, a really nice guy and a great supporter of the music. I am indebted to Jim Harrison for introducing him to me,” said jazz bassist and composer Larry Ridley.

White worked with the pioneer jazz promoter Jim Harrison from 1976-’83 promoting jazz shows and dancing (Uptown Jazz Junta) in Harlem at St. Charles Borromeo Catholic Church. They presented such musicians as Dexter Gordon and Johnny Gibson. White originally met Harrison (1967) in Jamaica, Queens at Club Ruby, where Harrison held weekly jazz shows that featured such notables as Frank Foster, Irene Reed, Hank Mobley and Benny Powell. Aside from promoting shows with Harrison he also wrote regularly for his groundbreaking jazz publication Jazz Spotlight. “Nat was always promoting. He was totally devoted to jazz to the last minute,” said Harrison. “He was an icon.”

I was introduced to Nate some years ago at Grant’s Tomb by Jazzmobile’s former director Dave Bailey. “Hey Ron, this is the jazz guy you really need to know, Nat White,” said Bailey. I looked up at this man, who was about 6-foot-4 or so, he looks down at me with this huge mustache and big smile—we were friends from that moment. It was the smile and handshake; I guess that’s why he is referred to as “the gentle giant,” but it should be “the gentle jazz giant.” He was friends with jazz giants such as Irene Reid, Jimmy Heath, Bobby Timmons and Barry Harris.

“Once this pandemic is over and we resume live jazz with audiences I will continue our VTY Sunday Serenade Series in honor of Nat,” stated Perez. “His family informed me they want his name and memory to live on in the NYC jazz community. To assist in preserving White’s memory, Stark & Stark Attorneys at Law in South Jersey have made a sizable donation in his honor."

Perez and jazz radio host and producer at WKCR-FM Sharif Abdus-Salaam attended White’s funeral in Pennsylvania on July 12, noted Perez. “It was a small gathering by invitation only due to the pandemic. It was a beautiful sendoff given to this gentle giant and I have a feeling that Nat would have wanted it that way.”

White is survived by his wife Ethel of 66 years; his son Eric; daughter Gerri White; and grandson Chris White.

EDDIE GALE, the trumpeter, composer and community activist, who was dubbed the original avant garde trumpeter by Sun Ra, died on July 10 at his home in San Jose California. He was 78.

The cause was prostate cancer, his wife, Georgette Gale, stated in the New York Times.

Gale, a native of Brooklyn, moved from New York to California in the 1970s setting his roots in San Jose where some years later he was acknowledged as San José’s Official Ambassador of Jazz, proclaimed in 1974 by then Mayor Norman Mineta. While Gale did not spend his years in California playing in the major jazz clubs, he was recognized as a major contributor to jazz music throughout the United States, having toured extensively throughout the U.S., Europe and Canada. He was a community activist and his many concerts in San Jose and the Bay area were attached to worthy causes. “My belief is that, if all of us artists consciously take time to help ourselves raise money for our health care it will be there when we need it. And not live such an emergency kind of lifestyle all the time,” stated Gale during my interview with him for this publication in 2003. A portion of his concert proceeds often went to local health organizations or to the Jazz Foundation of America.

Other concerts were connected to a national holiday (or a significant day in Black history) such as Martin Luther King Jr. Day that included a program on Black culture. He was still rehearsing his latest band and playing vigorously as recently as April, when the coronavirus shut everything down.

When he wasn’t performing, working out material with a new band, or being director of the Inner Peace (student and professional) Orchestra, he could be found teaching in various classrooms that included California Artist-in-Residence at San José State University 1999-2002; Monroe Middle School (in Campbell, Calif.); East Side Arts Alliance/Black Dot Artists Collective and McClymonds High School (both in Oakland); and Artist in Residence at Stanford University in 1972. As an activist interested in youth programs, he played a major role in establishing local organizations such as the Evergreen Youth Adult Jazz Society, the We’re Jazzed! Youth/Adult Jazz Festival, and the annual Concert for World Peace and Peace Poetry Contest.

Edward Gale Stevens was born in Brooklyn on Aug. 15, 1941, the third of five children of Edward and Daisy Stevens. His father was a plumber’s assistant; his mother worked in a garment factory.

He began playing trumpet at an early age and later took lessons from the jazz icon Kenny Durham. As a native of Brooklyn, he played local jazz clubs in the area and was a noted regular at Sista’s Place, where his name is listed on its “legends wall.”

Gale is primarily associated with avant garde jazz due to his long association with Sun Ra and his Arkestra and his stint with Cecil Taylor. Gale didn’t like to be categorized since he played everything from classical to straight-ahead hard bop with musicians such as Larry Young, Elvin Jones, Booker Ervin and Illinois Jacquet. As a leader he recorded 17 albums of mostly original music, and nine albums as a sideman. He recorded for Blue Note Records, Mapleshade Records and Roof Top Records.

My fondest memory with Gale was our first meeting after having conversed with him for over five years by phone. During my visit to Monterey, Calif. to cover the Monterey Jazz Festival (2017) he and his wife Georgette (married in 1985) picked me up at the hotel and took me to his favorite fish joint. We had a ball, laughing, talking about music, the San Jose scene and his upcoming projects. The jazz world will surely miss Gale but his music will carry his legacy for generations to come.

“The ocean is very important to me, it’s extremely soothing,” stated Gale. “I often go to the ocean to practice playing my horn and meditate. The exercise is a part of my positive thinking and visualizing positive things that will happen in the present and future.”

In addition to his wife and his sister Joann, Gale is survived by six children: Donna, Marc, Chanel, Djuana, Gwilu and Teyonda; 12 grandchildren; 11 great-grandchildren; another sister, Leticia Peoples; and a brother, David Stevens.