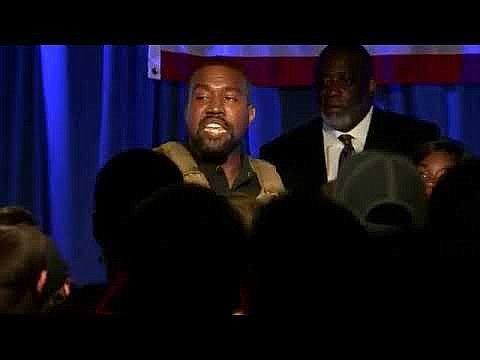 “We must now realize the promise of America by trusting God, unifying our vision and building our future. I am running for president of the United States 🇺🇸! #2020VISION”

SMH!!! This dude?! Again??? We’re in the right place; it’s the land of the free, and the home of the brave. The ideal narrative says since we have infinite opportunities, we as a collective nation can be all that we can here. Barack Obama’s ascension to commander-in-chief has even proven that a term as the president of the United States is within grasp. But by the way this dude is moving, maybe Number 45 serves as his muse. Like the former he is a Black man with ties to Chicago; like the latter, his fame and accomplishments (as a music and fashion impresario) may be enough to parlay him and his family into a change of residence to 1600 Pennsylvania Avenue. Sadly though, this isn’t a tale that could be celebrated. We’re in the wrong time. It’s not a time to play. Dude is playing. And if he takes the temperature of the nation, the stakes in 2020 are higher than ever.

While we search for a rational explanation, we’ll be severely hampered in finding one, as he was as clear as mud when he stated why he chose to embark on this trail this late in the presidential campaign. But in an interview with Forbes after he made his declaration he did come up with a salient point. “That is a form of racism and white supremacy and white control to say that all Black people need to be Democrat,” which can’t really be challenged. He continued to opine, “I was threatened as a Black man into the Democratic party. And that’s what the Democrats are doing, emotionally, to my people. Threatening them to the point where this white man can tell a Black man if you don’t vote for me, you’re not Black.”

Crazy that he brings up the issues he faces as a Black man when if you’ve ever listened to him since his influence has blossomed you’ll get jewels like these, which were also from Forbes, “Oh, one other thing—Black History Month. That is torture porn because when that comes up what we do is we see—and by the way, if I get that vibe—that’s the process and we are going to a beautiful, uplifting, fun, creative process as a people, as America collectively, and show the world how great we are. So here we go. Black History Month. Every year they gotta remind us about the fact that we couldn’t vote, ‘they’ meaning white supremacy construct, and I said that with the CT at the end, I knew what I was talking about . . . Our minds are so much more infinite than what’s coming across TikTok or Instagram, what’s trying to influence our children and the next generation of who we are.”

So, is our history to be ignored? Later this week he doubled down on the sentiment when he held a rally in South Carolina when he uttered the following regarding one of the original Freedom Fighters, Harriet Tubman: “She never actually freed the slaves, she just had them work for other white people.” So maybe our history should be buried. Up until to the part where we got acclaim as being beat makers, rhyme sayers and clothes wearers that is.

Again dude, why? What’s the end game? Oh wait, this just in, today on Twitter it was revealed that he’s getting ready to drop a new album as early as this week. If you blinked you missed it, because he deleted the tweet within minutes. Like you said of yourself on a cut from your first CD, you are a GROWN AZZ KID dude. No need to mention his name, if we do it’ll just add to his press clippings.