Nets prepare for NBA restart inside the league’s bubble 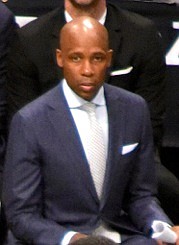 It’s been four months and one pandemic since we woke up early on that Saturday morning, March 7, with the news that the Brooklyn Nets had fired head coach Kenny Atkinson, replacing him with assistant coach Jacque Vaughn.

The Nets’ 2019-2020 season had been inconsistent. They teetered back and forth between the 7th and 8th seeds, the bottom of the playoff qualifiers.

Atkinson, in his fourth season with Brooklyn, had navigated a team that suffered from major injuries. Kyrie Irving, who signed to the Nets last year this time, only played in 20 games. Teammates Caris LeVert and Spencer Dinwiddie also missed a significant number of games, also due to injury.

With all of Brooklyn’s health issues, Atkinson kept the team in contention. They had seven less wins at the start of February than the year before, only five less at the start of March. But according to Sean Marks, he and Atkinson mutually decided that a change was needed for the Nets to progress.

“After discussions with Kenny about the progress of the season, we mutually agreed that a coaching change would be in the best interest of the team,” said Marks. The thought being, the team needs a new voice.

Brooklyn got a new voice. The interruption of the season saved them from all of the scrutiny and backlash that should have come, and what was expected to come with Atkinson’s dismissal. Timing is everything, despite the circumstances.

During his shortened interim position, Vaughn was 2-and-0. Win number one was a 110-107 home win versus the Chicago Bulls. Win number 2 was a narrow 104-102 road win versus the Los Angeles Lakers. An unexpected shock to the system of LeBron James for sure.

Coaching as an interim is hard enough. With Brooklyn’s injuries and players not available due to this virus, Vaughn, as well as all of the other NBA coaches, will finish out the season with a newly designed pre- and post-game schedule that fits the requirements to compete in the league’s bubble located at ESPN Wide World of Sports Complex near Orlando, Florida.

“I think overall, we’re so used to game routine. Having a night game. What shootaround looks like going into that game, even the night before, the day before’s practice looks like,” said Vaughn.

Everything that Vaughn, the players and coaches were used to, schedules and routines, has been upended.

“Where you’re warming up at might not be on the same court that you’re playing on,” expanded Vaughn. “We’ll have to challenge ourselves to definitely be flexible.”

Brooklyn’s flexibility and ability to adapt to change will begin to be tested next Friday, the 31st against the Orlando Magic followed by games against the Washington Wizards on Sunday, Aug. 2, and the Milwaukee Bucks on Tuesday, Aug. 4.