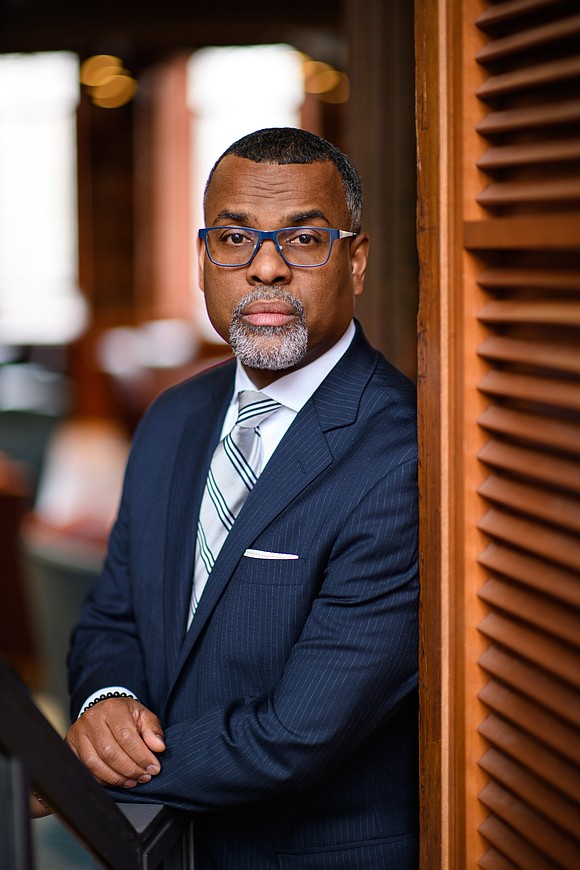 Eddie Glaude, Princeton professor of African-American Religion and author of “Begin Again: James Baldwin’s America and Its Urgent Lessons for Our Own” Sameer A. Khan photo

In his new book “Begin Again: James Baldwin’s America and Its Urgent Lessons for Our Own,” Princeton University professor of African American religion, Eddie Glaude, confesses that for many years, he hesitated to engage with James Baldwin’s work. Baldwin’s blunt truth telling made him uncomfortable. “I could not reconcile his rage with his talk of love,” he writes. In academia, it also demanded that Glaude deal with the fragility of his white colleagues, which he then had no desire to do.

“Begin Again” is both call-to-action for Americans today, an era Baldwin would describe as an “after time,” and paean to Baldwin, long recognized as one of our nation’s greatest writers and thinkers. Baldwin, who died in 1987, published more than 10 books, and made numerous speeches and media appearances wherein he dissected the scourge of racism in America.

The present moment almost demanded Glaude turn to Baldwin, who sat at the intersections of being both queer and Black. Not only are the gains of the gay, civil, and women’s rights movements being turned around, Democracy itself is in an unprecedented hasty retreat. These are the darkest of the “after times” indeed. Glaude’s “Begin Again” reminds us that the duty to turn things around is ours. Baldwin is our guide.

Baldwin, Glaude states, “Grappled with profound disillusionment after the murder of Dr. King.”

King’s death ushered in the “after time” of Baldwin’s era. One that, Glaude points out, culminated in the election of Ronald Reagan, “Just twelve years after the last major legislation of the Great Society—the Fair Housing Act of 1968.” Still, Baldwin ended up hopeful that America could truly be great. “I had to understand,” writes Glaude, “how he did that.”

Certainly the Black Lives Matter movement was almost inevitable as a consequence of today’s “after time,” which has seen a backlash against progress symbolized by America’s first Black president, Barack Obama. Asked what he believed Baldwin would say to today’s BLM activists, Glaude replied, “I would say what Baldwin said to a group of students at a Howard University event in 1963. ‘Promise never to believe what this world says about you. Don’t assent to the lie.’”

Working hard to topple these dangerous untruths once and for all should be foremost in mind for those seeking to no longer have to contend with “after times.” “Fighting for a living wage or for full funding of public education and desegregation of schools,” explains Glaude, are the types of things we should all be doing to turn these foundational myths on their head. “It means fighting to have school public education funded in a way that in a way that every child, no matter the color of their skin or their zip code, is getting a quality education. It may be arguing for a healthcare system that isn’t fraught with racial disparities or a criminal justice system that’s actually fair.”

Looking inward is vital to influencing change outside ourselves. It warrants facing our own discrimination such as transphobia, sexism, and colorism. “Baldwin insisted,” Glaude said, “that the messiness of the world is a reflection of the messiness of our interior lives. In order to most effectively argue for a more just world, we need to deal with the junk within ourselves individually. What does it mean to build a just society? It means addressing patriarchy, ableism and a range of other things.”

The scene in “A Few Good Men” where Jack Nicholson’s Nathan Jessup shrieks at Tom Cruise’s Daniel Kaffee that he “can’t handle the truth” is one of the most memorable in film history. It resonates universally because so many are bad at accepting truth. However, there is no other way to destroy lies.

K-12 education is another area Glaude believes those who wish to destroy “the lie” need to improve upon. “America has never committed itself to educating all its children,” said Glaude. “Even now we don’t hear Trump pushing for children in private schools to go back and act as guinea pigs in these environments where COVID-19 is doing all this devastation. It’s public schools.”

Manipulation of the voting process has been the cornerstone of maintaining the lie. In these times, Glaude agrees, it’s incumbent on all of us to exercise the utmost agency and urgency to protect it. Glaude said, “We know that Donald Trump is going to cheat. We have to bring pressure to bear on politicians to put in safeguards not only with regards to outside influence but the shenanigans going on domestically as well.” Organizing is key. “It’s going to take grassroots mobilization and attention to the obstacles thrown in our way,” emphasized Glaude. “Follow people like LaTosha Brown with Black Votes Matter, and Stacey Abrams, who are doing important work organizing around the elections. We have to be deliberate and diligent.”