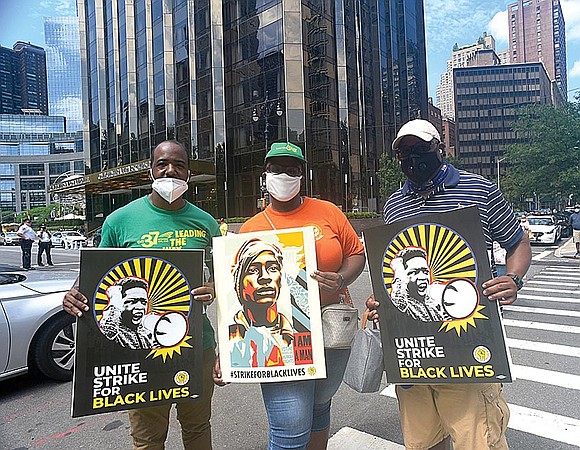 Hundreds of essential employees from 32BJ SEIU took to Trump International Hotel to demand Congress and the White House do right by essential workers.

“Working people are suffering under a three-pronged crisis—systemic racism and unchecked police brutality, a public health emergency ravaging communities of color, and a rigged economy that only works for the very few at the top,” said Kyle Bragg, 32BJ SEIU president. “Today we’re here to demand from those in power, including the man whose name is on the building behind me, that they ensure the health, safety, and economic well-being of every worker, and that they work to dismantle white supremacy and end police brutality.”

32BJ SEIU members had some backup during the protest. They were joined by representatives and workers from the New York State Nurses Association (NYSNA), Teamsters Joint Council 16, Laborers Local 79 and the Public Employees Federation. Brooklyn Borough President Eric Adams and Manhattan Borough President Gale Brewer attended the rally as well.

Holding up signs that read “Our Lives are Essential,” workers declared their importance to America’s big picture. Schumer took that notion to heart.

“Essential workers have protected millions of Americans, now the Senate must protect them,” said Schumer. “Inaction is no longer an option. It has been one month since the House passed the HEROES Act and Republican senators have been bailing out billionaires and corporations, leaving workers behind.

The HEROES Act has been a lightning rod topic especially for workers and educators. Last month, the American Federation of Teachers went on an ad assault in certain states urging citizens to press their senators into passing the bill. New York City’s school system is depending on relief from Washington via the HEROES act as part of their plan for the 2020-21 school year.

As of this moment, 3.9 million people were diagnosed with COVID-19 with 143,000 of those cases resulting in death. Most of the deaths are of people of color. Doctors and scientists are still studying the damage the virus can leave even in those who survive it. This is why one worker wants the public to know her struggles are real and it’s not only reserved for her. Others are in her predicament.

“Every day I go to work to protect some of the most vulnerable people in our city,” stated Eva Conyers, an overnight security officer at a homeless shelter. “Essential workers take on too many risks. I am scared every day I could bring the coronavirus back home to my family. Black people like me are under constant threat to become a victim of police brutality.

“And the economic devastation that has come with the disease means that none of our jobs are safe,” added Conyers.