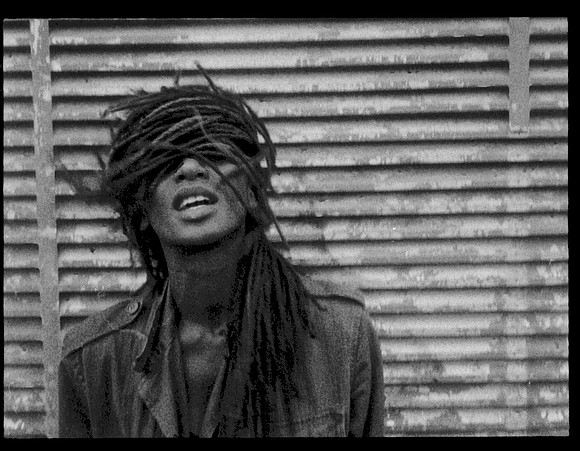 During this ongoing COVID-19 pandemic, Oliver Lake the alto saxophonist, composer, arranger, big band leader, poet, and visual artist has found another way to supplement his income. His daughter Maya, a fashion designer in Los Angeles, inspired his latest project to make masks, a most needed commodity in these new times. His daughter’s company Boxing Kitten is currently making African-print masks which gave him the idea. He is using designs from his various pieces of artwork. “It’s a way to get my work out there that is also on Facebook and it gives me the opportunity to collaborate with my wife, Marion,” said Lake. He started with 35 masks and of course by the time I settled on a specific design he was down to only four, so I had to go with my second choice until a new shipment arrives in the next two or three weeks. The mask designs are colorful abstracts, made of satin with a cotton inner-lining. Well worth the $25.

When not carving out time for his creative masks, Lake is writing big band charts, or practicing on his alto and soprano saxophones and flute. “When not in music mode, I like to paint so that’s what I’ve been doing, working a collage and large canvas,” explained Lake. “We also revamped my website so now you can purchase my artwork and music in one place. For complete down time I watch a lot of movies.”

Recently, he performed a live stream with the innovative group Tar Baby featuring pianist Orrin Evans, bassist Eric Revis and drummer Nasheet Waits. Lake can be called a guest member having recorded three albums with the group. “I had a good time playing with the guys; it’s been a while since the coronavirus closed all the jazz clubs, and touring has become obsolete for the moment.”

Lake is a creative force, a mellow soul, who consistently connects with like minds to form such astounding collaborative forces as the World Saxophone Quartet that he co-founded in 1977 with David Murray, Julius Hemphill, and Hamiet Bluiett. In 1988, he co-founded Trio 3, another innovative collaboration with Reggie Workman and Andrew Cyrille. As a pianoless trio some of their recent albums on the Intakt label have featured guest pianists such as Geri Allen, Jason Moran and Vijay Iyer. Trio 3 has recorded over a dozen albums since its inception; with The World Saxophone Quartet, Lake has recorded at least 20 albums; and as a leader at least 40. Lake’s performances may include him playing alto, soprano or flute with maybe his poetry or his artwork vividly displayed as a backdrop, despite his configurations all of which are exciting while disregarding the categorization of avant garde. One album with the World Saxophone Quartet that is screaming to be reissued is “Political Blues” (Justin Time, 2006). Its title seems more than apropos for these current times.


“Since we don’t know how long this pandemic is going to last, I am just trying to be even keel,” said Lake.

To check out Lake’s artwork or music visit his website at Oliverlake.net.

The European record label Gearbox is set to release trumpeter and composer Charles Tolliver’s album, “Connect,” on July 31. This is Tolliver’s first studio album release in 10 years, so for his fans and the entire jazz world this is, in the words of Bobby Short, “a big deal.”

A genius musician, arranger, big band leader like Tolliver should be signed to a major record label, releasing albums on a regular basis—anything less is a loss to the international jazz community. His record label Strata-East that he co-founded with pianist Stanley Cowell whose roster included Max Roach, Clifford Jordan and Gil-Scott Heron became a blueprint for following generations.


During our telephone conversation Tolliver said he recorded this album last year (Nov. 7, 2019) while on tour in Europe. “We had a gig at the Jazz Café in London and we recorded the album that morning,” said Tolliver. “I took a page from those quick Blue Note Records recording dates in and out, we finished in six hours. Did the gig that night and was on the plane the next morning back to the States.” The established well-tuned group included pianist Keith Brown, saxophonist Jesse Davis, bassist Buster Williams, and drummer Lenny White. The four tracks on “Connect” are “Blue Soul,” “Suspicion,” “Emperor March” and “Copasetic.” “Blue Soul” has a hypnotic drum beat that reaches your toes and vibrates the soul. “I just told Lenny to lay down a beat and he was right in the pocket,” said Tolliver as it related to the cut “Blue Soul.”

Emmett Till’s horrible killing at the age of 14 (Aug. 28, 1955) was so horrific it played a role in galvanising what would become the decades-long struggle for Blacks to stand tall without fear of racial discrimination and state-sanctioned violence. It was the photos and open casket funeral of Till that struck the soul of Black America. There were two photos that appeared in every Black newspaper in the United States and Jet Magazine. One was this handsome young Black man with a big smile encompassing his dreams of tomorrow and wearing a hat, Chicago style. The second pictured a dreadful sight of the same young Till with a massive hole in his head and barbed-wire marks covered with heavy mortician’s makeup. More than 100,000 people came to visit the open casket and pay their respects to Till as his body lay in his hometown of Chicago for five days. The sight of Till will never be erased from the mind of America and will always weigh heavy on the hearts of Black folks just as Billie Holiday’s singing of “Strange Fruit” will strike a tear.

On the eve of what would have been Till’s 79th birthday (he was born July 25, 1941), the Paris-based, London-born artist ALA.NI is sharing the new song “Lament for Emmett Till.” A sparse, achingly beautiful track, it recites a 1955 poem of the same name by the activist and journalist Claudia Jones.

“Six years ago, I was studying the works and activism of Ms. Claudia Jones and came across a poem that she had written for Emmett Till in December 1955. This poetry moved me to write a song,” ALA.NI recalls of the new single’s origins. “I then went to the studio to record a demo version of the ‘Lament for Emmett Till’ and I could only sing it once. It was too painful to sing again. The version released is the first take, the one and only recording. The studio tape was lost. Six years later, I have no choice but to sing it, shout it, scream it.” The track arrives as part of a lineage of songs inspired by and dedicated to Till through the years, by artists ranging from Bob Dylan, Joan Baez and Emmylou Harris to Janelle Monae and Hypnotic Brass Ensemble.

“The FBI are due to release the findings from their reinvestigation of the murder case any time soon and, what with Carolyn Bryant still being alive, we think there is no better time than now for her to stand guilty as charged for her lies told and her role in the capture, beating, lynching and murder of Emmett Till,” said ALA.NI. “The ‘Emmett Till Anti-lynching Act’ cannot be properly addressed with a correct, conscious outcome in Congress if the name of the person after which the act is called has not been served any justice. Nothing. No apology. No compensation. It is a mockery.”

This campaign is supported by the Emmett Till Legacy Foundation, for which ALA.NI is an official ambassador. The foundation is currently asking the public to sign a petition demanding justice for Till and, specifically, that the FBI release the findings of their recent reinvestigation into his murder as a matter of urgency. All proceeds from the “Lament for Emmett Till” will be donated to the foundation; you can stream the single and video. Visit the website alaniofficial.com.