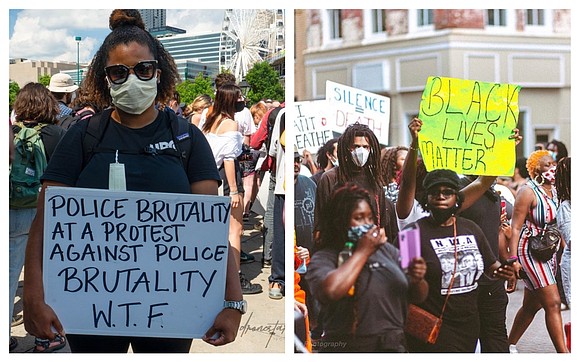 Protests in Atlanta (left) and Fayetteville, NC Photos by Dronestar1 and Ramel Bocker

Chants of “no justice, no peace” and “prosecute the police,” continue from protesters across the United States. George Floyd, known as a “gentle giant” to his loved ones, is one of the latest African Americans to be killed in police custody. His wrongful murder, by the hands of white Minneapolis police Officer Derek Chauvin, is the last straw for Black Americans, as well as many others fed up with systematic anti-black racism. Atlanta, New York City, Oakland, and Minneapolis are a few of the many cities across the nation with large marches in response to injustices of Black people dying at the hands of police. More violation of human rights is inexcusably nonstop for African Americans during this COVID-19 pandemic.

“We believe stronger limitations to police use of force should be enacted in a state’s law to present the best opportunity for guidance for law enforcement officers and accountability where force is used excessively, particularly when it results in death,” said Kristina Roth, Senior Program Officer for Criminal Justice Programs at Amnesty International USA. The organization works across the U.S. to pursue justices of critical human rights violations. Roth expressed that human life is too precious and police must reserve deadly force, before causing irreparable damage to families by senselessly killing their loved ones.

“In this moment,” Roth continued, “when communities are crying out in pain in the streets for the unnecessary loss of George Floyd, Breonna Taylor and others, elected officials must do more to prevent these deaths from happening again and provide for greater accountability in our laws that dictate how an officer may use force or lethal force.”

Amnesty International has advocated for the right of the media to document and distribute information to the public. The organization has also spoken up when media personnel are arrested by police, like the recent arrest of journalist Omar Jimenez by Minneapolis police while reporting live.

Committee to Protect Journalists Program Director Carlos Martinez de la Serna made this statement on May 30 in New York: “Journalists have a responsibility to report on matters of public interest, such as protests, and should be able to freely cover these events without fear of retaliation from authorities. These arrests ring of intimidation and are simply outrageous.”

Black Americans and non-black allies strongly believe protests must continue to ensure that all state governments hold every police department accountable for excessive force that violates black lives. The reality of the COVID-19 pandemic and racism for black Americans simultaneously is an enormous deal to bear. Social distancing is still a necessary practice to avoid a second wave of the virus. However, many protesters are not allowing COVID-19 concerns to deter them from attending demonstrations.

“I think we have to find a way to care about both things,” said Brooklyn Assemblymember Mathylde Frontus. Frontus responded to the large crowd of protesters in front of Barclay’s Center in Downtown Brooklyn by saying, “everyone should wear their mask and take precautions. I’m very concerned about a second wave of the coronavirus. But there’s no way that we cannot protest. That’s impossible.” Multiple video footage of what happened to George Floyd, as well as the countless videos and reports of black people being murdered by authorities are triggers for people of African descendant.

The African American community is deeply disturbed by videos of their violated human rights from authorities who are supposed to protect and serve communities. “It’s a human right violation,” Assemblymember Frontus continued. “There are moments in our lives that push us to have a visceral reaction. This was one of those moments.”

Newly released security footage shows officers taking a series of actions that neglected George Floyd’s human rights. The four Minneapolis Police officers involved disregarded Floyd’s life as he cried and pleaded that he couldn’t breathe. Enraged Minneapolis protesters sent a strong message to their city by setting fire to Police Department’s 3rd Precinct on the night of May 29. People are dissatisfied with non-functionality of police departments and the District Attorney offices when it comes injustices of Black Americans. There have also been reports of white people posing as protesters to stir up violence and pushing black protesters into cops. Unproblematic protesters are chanting, singing, and peacefully exercising their rights. Unfortunately, police officers are using excessive force and initiating violence by shooting protesters with rubber bullets and striking them with batons, as well as arresting them.

“People have a right to demonstrate and raise their voices free from intimidation of unnecessary or excessive force,” Kristina Roth at Amnesty International added. “Law enforcement should facilitate the right to peacefully protests and reserve arresting people for low level offenses related to protest-related activities unless absolutely necessary.”

A number of cops have shown unity to protect each other as they brutalize black people. They are continuing slavery-based actions by targeting and taking black lives. Defunding the police is a movement that many are hoping will defuse police brutality.

“In this instance,” Assemblywomen Frontus expressed, “we are just watching one big movie reel of a story that has been playing out for many years. There is an indifference to black pain and suffering. There’s a 400-year history of dehumanization of black bodies.”