NFL comments on George Floyd and gets roasted on Kaepernick 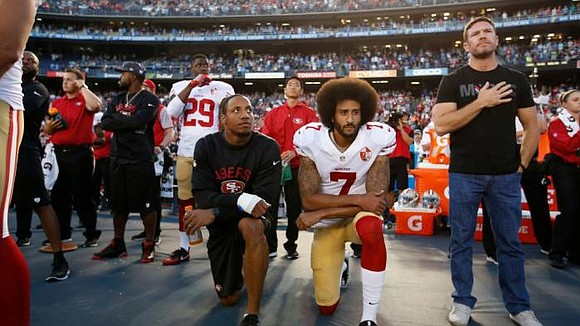 The NFL and NFL Players;' Association has agreed to put the League's new national anthem policy on hold.

NFL Quarterback Colin Kaepernick, 32, hasn’t played in the NFL since the 2016 season. He was blackballed by the NFL after silently protesting police brutality by silently taking a knee on the sidelines during the national anthem at the start of NFL games.

Kaepernick became a free agent after the 2017 season but was not signed. In November 2017, he filed a grievance against the owners of the NFL and accused them of colluding against him. In Feb. 2019, Kaepernick withdrew the grievance after reaching a confidential settlement.

On the night of May 30, after three nights of protest around the country following the death of George Floyd, 47, recorded on video showing former Minneapolis police Officer Derek Chauvin kneeing him in the neck — the NFL released a statement.

“The NFL family is greatly saddened by the tragic events across our country,” stated NFL Commissioner Roger Goodell.

“The protesters’ reactions to these incidents reflect the pain, anger and frustration that so many of us feel. Our deepest condolences go out to the family of Mr. George Floyd and to those who have lost loved ones, including the families of Ms. Breonna Taylor in Louisville, and Mr. Ahmaud Arbery, the cousin of Tracy Walker of the Detroit Lions,” the NFL statement continued.

“As current events dramatically underscore, there remains much more to do as a country and as a league. These tragedies inform the NFL’s commitment and our ongoing efforts. There remains an urgent need for action. We recognize the power of our platform in communities and as part of the fabric of American society,” the NFL statement also read.

The reaction that followed, which recognized the deep irony of a league that ostracized and blackballed a player protesting police brutality and the statement was not lost. Kaepernick often made the point that his protest was focused on police brutality and racism in America. Other players joined Kaepernick in protest during his last year in the league and his momentum was building

“Wow I can’t believe all the NFL owners turned out to be colluding racists and Kaepernick was right the whole time. It’s almost as if this is a systemic issue in America,” wrote Justin Horwitz on twitter.

“Where were you when Colin Kaepernick was peacefully protesting racial injustice by taking a knee? Oh, that’s right your entire league and its racist owners were conspiring against him,” wrote Ryan Knight on social media.

“Michael Vick served more time in jail for killing a dog than all the cops combined who have killed the last 493 unarmed black MEN. Let that sink in,” wrote Adam Webber on twitter.

On May 28, Kaepernick wrote the following from his twitter account: “When civility leads to death, revolting is the only logical reaction. The cries for peace will rain down, and when they do, they will land on deaf ears, because your violence has brought this resistance. We have the right to fight back! Rest in Power George Floyd.”

“Two knees. One protesting in the grass, one pressing on the back of a man’s neck. Choose. You have to choose which knee you will defend. There are no half choices; there is no room for indifference. There is only the knee of protest or the knee on the neck,” wrote Sally Jenkins in The Washington Post in a widely read article.

A GoFundMe for Floyd’s family reached $4.4 million as of the night of May, 30 as protests raged across the nation.

Disclaimer: The views and opinions expressed in this article do not necessarily reflect the official policy or position of BlackPressUSA.com or the National Newspaper Publishers Association.