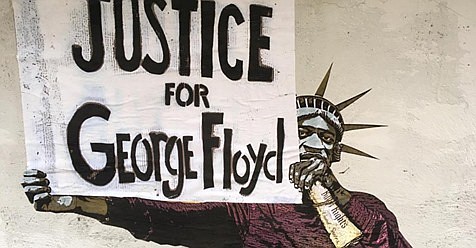 The murder of George Floyd, a Black man in Minneapolis yanked from his car, shackled and suffocated to death by a police officer aided by at least three other officers, was front page news in most of the major newspapers in the U.S. It was also covered internationally with many Africans expressing disgust and dismay over the cold-blooded police action.

Mike Hammer, U.S. ambassador to the Congo, received a tweet from a local media entrepreneur who wrote: “Dear ambassador, your country is shameful. Proud America, which went through everything from segregation to the election of Barack Obama, still hasn’t conquered the demons of racism.

“How many Black people must be killed by white police officers before authorities react seriously?”

Moussa Faki Mahamat, head of the African Union Commission, condemned the “murder” of Floyd and said Friday the continental body rejects the “continuing discriminatory practices against Black citizens of the USA.”

In a note that began with his deepest condolences to Floyd’s family and loved ones, Faki Mahamat, writing from Addis Ababa, recalled the July 1964 resolution by the Organization of African Unity on Racial Discrimination in the U.S. made by African Heads of State and Government where the chair of the African Union Commission “firmly reaffirms and reiterates the African Union’s rejection of discriminatory practices against Black citizens of the United State of America.”

(Faki Mahamat) further urges U.S. authorities to intensify their efforts to ensure the total elimination of discrimination based on race or ethnic origin.

Another top African Union official, Kwesi Quartey, wrote on social media: “This is one too many. We may be Black, but we are people too… Africa demands a full investigation into this killing.”

“Seated in the unenviable squalor of my modest, sparsely furnished living room, deep in the southern end of ‘shithole’ Africa, as American President Donald Trump casually described it in January 2018, I have come to the firm conclusion that America is not qualified to lecture my continent on human rights and democracy.

“I have watched the video of the tragic, untimely death of George Floyd in Minneapolis and have remained appalled at the brazen inhumanity demonstrated by the police in a ‘first world’ democracy.

“This is the same country that reacts with immediate moral outrage whenever something goes terribly amiss and somebody dies at the hands of the police and in full view of the public in Africa.

“The truth is the West does not really care about human rights, especially the human rights of African Americans and Africans; it just cares about preaching about human rights and striding the world stage with hypocritical pride and a pompous air. For if it really did care at all, America would not be witnessing nationwide protests today and its fellow ‘first world’ nations would not be so silent about it.

As disappointed as I am with America’s dubious modus operandi and deplorable human rights record, I have found Africa’s strong and unequivocal condemnation of Floyd’s agonizing death a truly welcome and positive development. Without a shadow of doubt, Africans are increasingly convinced that the way forward for their countries does not uphold the American system as a model but as a cautionary tale.”