Kearran Giovanni in BET’s ‘American Soul’ is a force of nature! 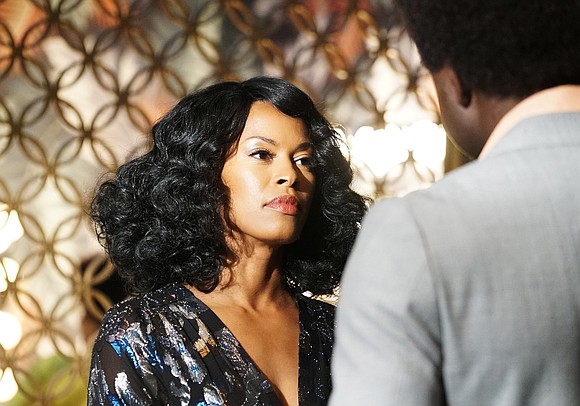 I doubt that you know the actress Kearran Giovanni by name and it’s not because the stunning actress isn’t busy (she is); I think it’s because Giovanni disappears into her characters so completely that you can only see the soul she’s committed to play, giving life to the character on the page.

You know the face because Giovanni keeps busy and is best known for her role as Detective Amy Skyeson in the television show “Major Crimes,” and she has appeared in several other television shows including “Royal Pains,” “Beauty and the Beast,” “Dynasty,” and “Bull”. She’s lent her talent to several recurring roles in “Black Lightning,” “Designated Survivor,” “The Resident” and “One Life to Live.”

But it’s her creation of the character Ruby Daniels in “American Soul” that caught my eye where she plays a femme fatale assassin with strong ties to the ruthless mob and is the ex-lover of Gerald Aims (Jason Dirden). Things heat up when she blows into town to fill the void left by another mobster’s death.

Here is what actress, rising star Kearran Giovanni had to share about kicking ass and taking names in BET’s “American Soul” and her dream for the character—Ruby Daniels.

New York Amsterdam News: When Ms. Ruby Daniels walked into the storyline of BET’s “American Soul”—I stuttered. Your performance, Kearran Giovanni is that good. I tip my proverbial hat to you.

Kearran Giovanni: (laughing) Thank you. Thank you very much.

AMN: You are most welcome. So, you mentioned in these crazy times that you are concentrating on living your life with purpose, correct?

KG: Correct. For me, I’ve been on the go for years and my purpose right now is to stay with my family. To make dinner. My husband and I are creating a world for them right now that there will be a good memory of the time we are spending together right now. For children that means dinners. This kitchen is in full fire mode: 9 a.m. to 6 p.m. At some point, the kitchen must close.

AMN: Let’s talk about the deadly Ruby Daniels, anything you can share about her role in the future of the series?

KG: (laughing) Well … the producers of the show [BET’s “American Soul”] were tossing around some ideas about having a spin-off. An origin story about the relationship with Ruby and Gerald (Jason Dirden). Like a Bonnie and Clyde type of series. A look at where their love came from?

AMN: Mercy. I’d watch that. I hope they get their creative game plan together because that show will be crazy. Brutal. Sexy and may I also add, a stone-cold gas! See, what I did there?

This interview has been edited for clarity and length.