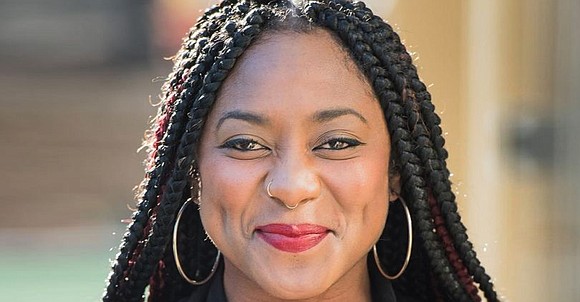 For Black Lives Matter co-founder Alicia Garza the global outpouring of protests and activism following the alleged murder of George Floyd while in Minneapolis police custody has been heartening and makes her hopeful for the future. At the same time, she said, “It’s bittersweet that it takes someone being murdered on camera to get to the point of conversation that we’re in.”

“I was horrified,” Garza said of viewing the video of Floyd’s life being taken by a white police officer with his knee on Floyd’s neck. “Every time a Black person is murdered by police there is something disturbing about it.” She added, said in this case, “just the callousness of it; and him calling for his mother. There’s just so much in there that’s horrifying. It’s just a brutal reminder of how Black lives don’t matter in this country.”

Garza, of Oakland, is Strategy and Partnerships Director for the National Domestic Workers Alliance and Principal at the Black Futures Lab.

Seeing Black Lives Matter (BLM) signs held by protestors in all 50 states, including in many small towns with few Black residents, Garza said, “It’s humbling to see it and to have been a small part of it.” She is heartened that people are awakening.

Garza said she is also pleased that many celebrities who have large platforms are using them now to push for change. She said the Black Futures Lab has a strategy for helping celebrities to use their platforms for the movement. “When they use their platforms to activate people, it’s an important way to save our democracy. It makes us active and engaged participants.”

“I got to take over Selena Gomez’ Instagram last week. It was awesome.” She said people are really hungry for information. “We’ve been doing a lot of work and talk about what’s going on. When folk like Selena do that, it engages people in issues of our time. I plan to work with her through this election cycle.”

Garza said she will also be taking over Lady Gaga’s social media in the coming week. “We’re really focused on transferring this energy into political power.”

She said it’s important to change the people who are making the rules and those who aren’t enforcing the rules. She cited as an example the election in Georgia this week where voters in predominantly Black areas waited hours to vote. Movement for Black Lives is not just about police violence. It’s about how Black lives are devalued. Black Lives Matter is for an opportunity for us to recognize and uphold the right to humanity and dignity for Black people. She said Black people also have to work “to remove the negatives we’ve internalized about ourselves.”

“For people who are not Black, there’s also work to do.” She said it’s not only about changing the rules, but also about a culture shift. “That’s what I think we’re seeing now. It’s going to take all of us staying committed.”

She said the millions joining protests following the alleged murders of George Floyd, Ahmaud Auberry and Breonna Taylor were sparked by, “a powder keg waiting to happen.”