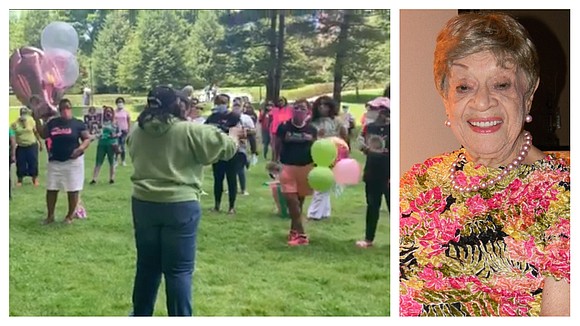 More than 100 members of Alpha Kappa Alpha Sorority Incorporated gathered on Sunday, June 14 to celebrate the 100th birthday of their Diamond Sorority Sister, Irma Charles Hines Clement, in the Riverdale section of the Bronx.

Hines was born in 1920 in Joliet, Illinois and raised in Alcoa, Tennessee. She worked various housekeeping and food service jobs to afford tuition at Knoxville College. She joined the Alpha Kappa Alpha sorority immediately following graduation in 1945.

In 2000, she moved to New York to be closer to her daughter and her granddaughter. Hines joined the Eta Omega Omega chapter of AKA in the Bronx. She remains an active member and recently celebrated reaching Diamond status, celebrating 75 years as an AKA.