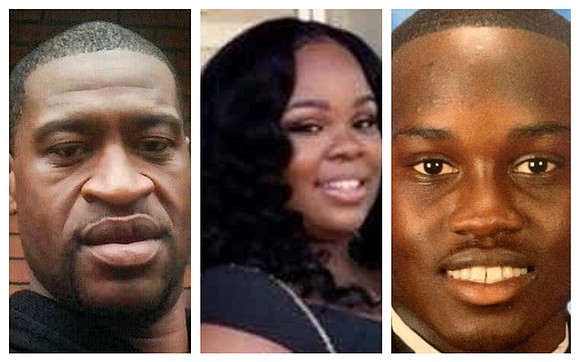 A familiar mixture of anger, anxiety, frustration and confusion are just a few of the emotions that stirred in the hearts and minds of so many Black people across the country following the May 25 execution of George Floyd and the events that followed.

Floyd, or “Big Floyd” as some called him, spent his final moments pinned to the ground by four Minneapolis police officers with one in particular, Derek Chauvin, kneeling into the back of his neck as he pleaded “Please, I can’t breathe”—words that rang too familiarly.

We stand just four weeks after discovering video footage of 25-year-old Ahmaud Arbery being hunted and gunned down in Georgia by a trio of white supremacists as he went about his daily jog. Following that, we learned of the March 13 slaughter of Louisville EMT worker, Breonna Taylor, as she lay asleep in her bed, riddled with bullets at the hands of police.

Year after year we are tormented with viral cell phone or body-cam footage of the morbid last moments of another Black person. For so long, Black people have had to endure the constant replay of the dehumanization of Black bodies by witnessing our very own public crucifixion.

The never-ending crusade of white America “looting” Black life has reached a universal limit for Black people across the globe, and yet the simple message that Black Lives Matter continues to be deflected by whimpers over broken glass and stolen televisions.

Many took to social media to express their dismay with the violent rioting taking place in Minneapolis and across the country but have seemingly developed a case of amnesia regarding the violent riots that have taken place against Black bodies and communities for centuries.

Dating back to the Red Summer of 1919, riots took place in over two dozen U.S. cities as racial tensions grew in the north because white soldiers returning from World War I saw that many of their jobs had been taken over by Black men. Additionally, many Black soldiers returning from the war were greeted with the same lack of civil rights and refused to endure racial discrimination from a country they had just served.

Nearly a century old, the May 1921 Tulsa Massacre is another example of white America inflicting violence on Black people as a mob of angry white men took to the wealthy Greenwood Black neighborhood looting and burning businesses and homes over a false accusation by a white woman.

It is clear that America thrives off of violence, it has always been the answer to their call and the basis of their foundation. As activist Tamika Mallory said at a press conference in Minneapolis, “Don’t talk to us about looting, y’all are the looters. America looted Black people. America looted the Native Americans when they first came here, so looting is what you do—we learned it from you. We learned violence from you, so, if you want us to do better, then you do better.”

It is ironic that property damage can cause such an uproar when Black people have been breaking down the wall of systemic racism, police brutality, poverty and sexism for over four centuries. There was no outcry for those bangs, so the notion that commercial infrastructure holds more value than Black life isn’t the least bit surprising.

However, it is imperative to differentiate between peaceful protesters and those who plead no allegiance to the cause, seeping their way into the movement for ulterior motives. It is obvious who the infiltrators who want to stain the message of the Black Lives Matter movement are. Across social media we’ve seen the videos of non-Black rioters amongst the crowd of protesters—smashing store windows, tagging buildings, setting fires and looting. The idea that Black people would spearhead such an audacious act when it invites the very same oppressors we are trying to escape from under is infuriating.

With the governing powers and the privileged people who uphold it trying to shift the narrative of the protests, it is important to remember purpose and perseverance, as novelist James Baldwin once said, “Ignorance, allied with power, is the most ferocious enemy justice can have.”