#BLM art across the U.S. 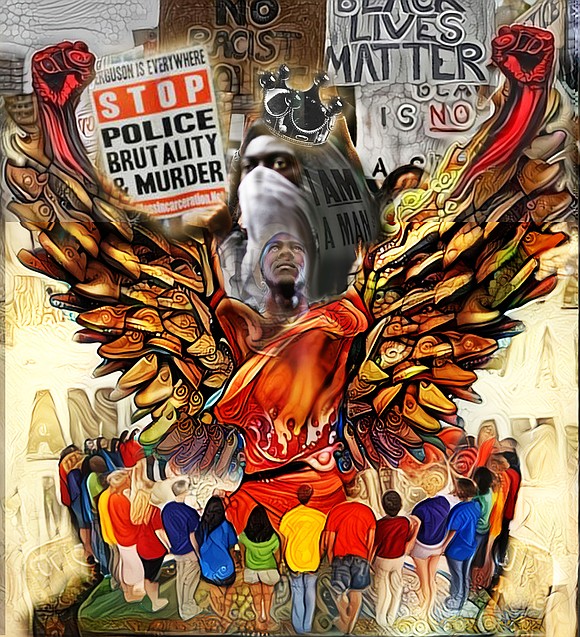 Armed With The Shield Of Truth and justice - Chazz, Detroit

At times there are no words. No words to adequately express the depth and breadth of what you’re feeling. A picture though, is worth a thousand words. Indeed, artists around the nation are speaking boldly, making it plain to all that Black Lives Matter.

Minneapolis is the epicenter of the street art around Black Lives Matter and the murder of George Floyd. Nearly every boarded-up window and blank wall in the area of Lake Street and the Chicago and 38th Street memorial have been painted by artists. There are more than 60 works of art. But all over, in cities like Miami, Richmond, Chicago, New Orleans, Durham, Raleigh, Greensboro, Providence, there are even more.

Here we showcase the street art of some of the many artists having their say and shaping the narrative.

Charles “Chazz” Miller’s work is poignant. His stained-glass piece with the face of George Floyd, a courthouse, and other symbols is a study for a large mural about “What we want!” to be reformed: civil rights, freedom of expression and justice for all based on the Universal Declaration of Human Rights, he explains.

Another work features the Statue of Liberty with a black eye from fighting its own people. The fists depicted represent freedom through power and unity. With his mural, “Armed With the Shield of Truth and Justice,” he hopes to uplift, to inspire change and to provide insight to those who can’t see. “But most of all, to convey the message, stop looking and start seeing,” says Miller.

Miller is just getting started. He’s looking for support on a large mural to honor all those who have lost their lives due to injustice. The working project title is “Souls for Peace.” He wants 1,000 pairs of donated shoes, preferably from those who have been protesting in marches. You can find out more via @chazzoriginalzart. 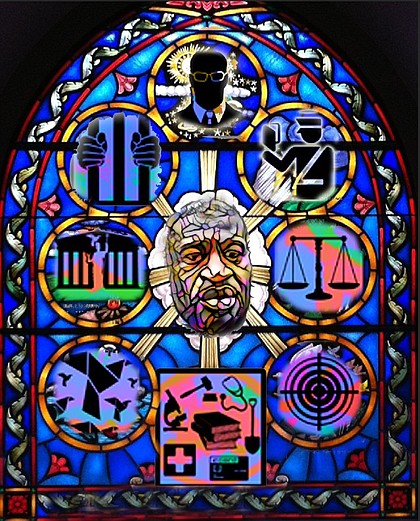 What We Know Now- Chazz, Detroit

You likely saw images of the massive Black Lives Matter banner in bright yellow letters that spans the width of two blocks on 16th street near the White House in Washington, D.C. Charlotte has a colorful Black Lives Matter mural. Seventeen local artists painted the letters that line an entire block along Tryon Street between third and fourth streets. The mural was part of a collaboration with the City of Charlotte, Charlotte is Creative, Brand The Moth, BLKMRKTCLT and the artists. From idea to completion the project took just a few days.

Abel Jackson was one of the artists. His task was creating the letter C. “I wanted to illuminate the fact that the need for justice and equality can’t be ignored. On one hand you have a society that declares that ‘All men are created equal’ but all are not treated equally.”

His design includes a silhouette of Tommie Smith for the “who raised his fist to fight for human rights and equality” at the 1968 Summer Olympics. “At the time the world tried to ignore him. In my design, the raised fist is surrounded by the brightness of the sun as if to say, you can no more deny us any more than you can deny the sun in the sky,” says Jackson

Jackson says participating was cathartic. “What I have been feeling has been extreme. I can exercise my emotions through art. It is good for mental health. I have marched and protested since Rodney King. Art is another form of protest.”

Dakota Carter painted the L in Black. “My goal was to show that even though Black people can adapt, it gets overwhelming to do over and over again. Yes, we’re strong and adaptable but that doesn’t mean we always want to be.”

She explains her work: “Wildflowers grow in any environment and any weather condition. Black people want respect and equal opportunities. We want to simply exist freely and not worry about looking over our shoulders. The flower person represents that message! The tiredness––represented as the fallen petal to see she’s slowly falling apart. The words ‘we all bleed together’ to say that we are truly one and we are all in this journey called life together.”

She wanted to highlight Black liberation. “The connection between life and flowers is something that most people can pick up on. When people see flowers, most people think of beauty. When you see flowers with missing petals, its beauty is questioned, people tend to ask what happened or what’s wrong. Then you try to get to the root of the issue. The root that causes all of this pain and suffering is systemic racism and white supremacy,” says Carter.

She says art activism is effective. “Since the mural, I’ve had a lot of white people reach out and express what the mural has done for them. Art opens the door for conversation.” 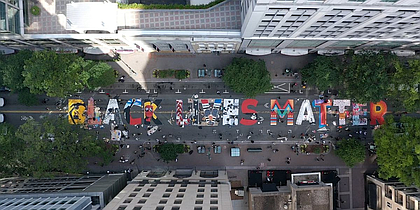 Charlotte, photo by David A. Thrower @7Hangtime on Instagram

Artists have been turning downtown Indy into a walkable gallery, reimagining boarded-up windows into artworks that show support and solidarity for Black Lives Matter. One of the first murals appeared at retailer Silver in the City, where windows were painted with the names of Black men and women who have been killed by police officers. Shane Fitz’s mural “This Mask Won’t Keep Me Silent” speaks loudly. His inspiration came from a plethora of things. “There is so much going on in the world right now. I chose to speak on not only racism, but gun violence as well. It is a pandemic the world has been fighting for centuries. Racism and gun violence are small pieces to a bigger puzzle. It was never designed for us to win, but the world is waking up. I think the next generation will be the change!”

Tyshaun Tyson and Ashley Kay are hard at work creating a BLM mural.

Tyson share’s their goals, “Black lives do in fact matter. Whether it’s a child or an adult, our lives matter and we are instrumental parts to this country and the world alike. Part of this mural was also inspired by the quote ‘They buried us, but they didn’t know we were seeds,’ (Dinos Christianopolous). The children depicted in the mural are an added element who will be ‘sprouting’ from the flowers and holding up protest signs with specific quotes/sayings.”

This is personal for Tyson. “I am a Black man. I have witnessed and experienced racial profiling on multiple occasions. Seeing the countless tragedies that have plagued our people for so many years literally hurts. I know I could easily be a victim of similar circumstances.”

Kay says she hopes the piece will lift the spirits of those who see it. “As artists we want to use our talents to inspire our community in times like these.” 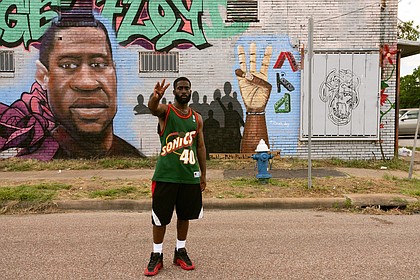 George Floyd grew up in the Third Ward in Houston. So did artist Jonah Jackson. They went to the same high school. Floyd was his friend’s uncle. Jackson contributed to a mural honoring Floyd. He created the hand holding up three fingers and the dominoes to the right of it.

“The hand holding up three fingers is how we throw up Third Ward. The dominoes is something I’ve been using in an anthropomorphic way in my work. The dominoes to the right of the hand spell out A R D, but the three fingers make W and also mean three which equals Third Ward to me. I made the dominos the Pan African flag colors to say that in this Black community we can lean on each other and use each other to support and lift ourselves up. In the game of dominoes when they connect, they begin to add up so I’m saying if we can continue to shop Black-owned businesses, we will continue to build our Black economic structure,” explains Jackson.

He hopes in a small way to be an agent of change, “It’s important for me to speak through art because it’s a way for me to unify Black people creatively by giving them something appealing to the eye but also having a message behind it.” 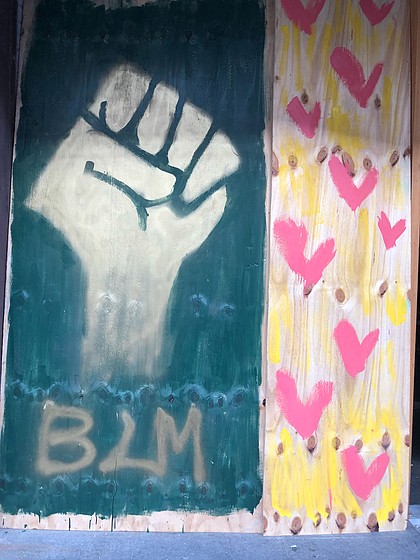 Mural in front of Skin Contact wine bar in NYC

It’s not only professional artists who are expressing themselves. Skin Contact is a new wine bar on the Lower East Side. Owner Salmi Zerri closed for a week in early June to give space and room for the BLM movement. She and other business owners on the block had a “painting party” for their storefront boards. Local artists, neighbors and customers of each business contributed to the effort organized by Daniella Kallmeyer or clothing store Kallmeyer.

With enough on her hands trying to stay afloat with a new business in the middle of a pandemic, participating was not optional. Says Zerri, “It was important to stand as a community. We hope a collective voice resounds louder.”