How will a possible comeback for Colin Kaepernick impact his legacy 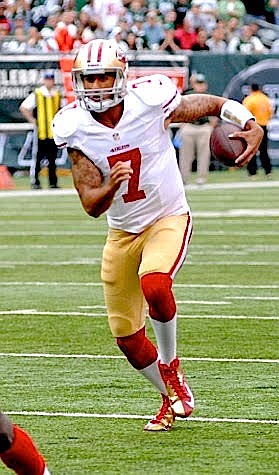 If quarterback Colin Kaepernick were to get a tryout, make a comeback, return as a player to the NFL, he’d have far more challenges facing him than just learning his new team’s playbook.

Not much has changed since he last played in 2016-2017. Quarterbacks still handle the ball for the majority of plays, for the most part. But as a quarterback, from Patrick Mahomes and Tom Brady to a third stringer on the team with the worst record, this is what’s important to QB.

Kaepernick would have to get back to football shape. He’d have to get acclimated to on-field play, the potential of hits from opponents, reading defenses, and the cadence of play-calling with his center and nine other teammates.

He would also have to reacclimate himself to today’s bigger and faster linemen who without doubt, welcome his return to the league, but not at their expense. The field is where their graciousness would end.

Kaepernick’s physical strength, especially his arm strength and the accuracy of his throws, and his timing, are essential. His responsibilities extend from handoffs, short yardage plays, to long balls, bombs. Cornerbacks will also lack graciousness.

Mental toughness is also a concern. Can Kaepernick still stand in the pocket and make a throw with a 6-foot-5, 265 pound player coming at him? Can he run, scramble, avoid a sack? Can he read the defense, call an audible? Can he grind out a short yardage run for a first down?

If Kaepernick returns to the NFL and he’s successful, that would expand the myth of Colin Kaepernick, his lore, from being distanced from the league to rock star status.

“If he wants to resume his career in the NFL, then obviously it’s gonna take a team to make that decision,” said Roger Goodell, the league’s commissioner.

“I welcome that, support a club making that decision, and encourage them to do that.”

If Kaepernick is not successful, if he didn’t make a team, if he only sits the bench, holds a clipboard in a back-up roster position, how will that be perceived?

It won’t lessen the courageous stance that he took, refusing to stand for the playing of the national anthem, protesting wrongdoings against Blacks and minorities in the United States, although dissent towards the song is reason enough.

Not contained in the original edited version or the re-mix, in Part 3 are the following lyrics:

“No refuge could save the hireling and slave, from the terror of flight, and the gloom of the grave.”

If Kaepernick doesn’t light it up as a quarterback, it may tarnish his shine, his street cred, remove his halo. It would justify the team’s reasons for not hiring him during his hiatus.

How he would fare on the field is as big a question as what’s in John Bolton’s upcoming Trump book or what’s Derek Chauvin thinking while locked in jail?

Not playing, living off of his current notoriety, could be the best thing for Kaepernick at this time.

His aborted workout for NFL teams last session could have possibly had a negative effect on his image, but the police murders and wrongdoings to people like Ahmaud Arbery, Breonna Taylor, George Floyd and now Rayshard Brooks keep Kaepernick more relevant than ever.