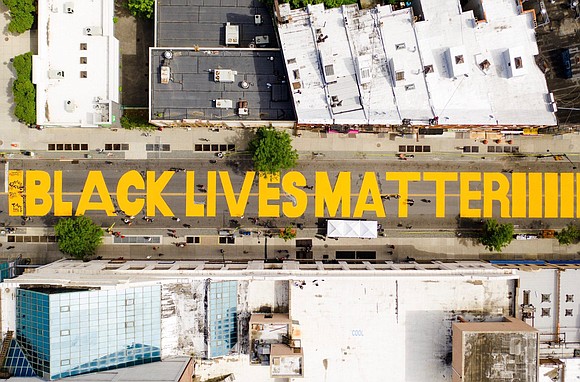 Harlem will be the site of one of Manhattan's Black Lives Matter murals. The mural, which will stretch across Adam Clayton Powell BLVD, between 125th and 127th streets, is presented by Harlem Park to Park and will feature work of Harlem artists and community organizations.

The mural is part of a commitment made by Mayor Bill DeBlasio to create them on streets throughout the city. The artists will begin work on the mural on Wednesday, July 1, and the final work will be unveiled on Saturday, July 4th.

State Senator Brian Benjamin, one of the sponsors of the proposal for Harlem Park to Park said, "Harlem is the cultural capital of the people, so the opportunity to showcase our artists and community to the world is imperative at this moment."

Nikoa Evans-Hendricks, executive director of Harlem Park to Park said, "Commerce and culture are intrinsically tied in communities like Harlem where economic and social inequities playout across all aspects of daily life."

The Black Lives Matter mural was made ubiquitous after Washington DC Mayor Bowser famously commissioned one for the renaming of the section of Pennsylvania Ave. facing the White House in the nation’s capital. A response in solidarity with protests ignited worldwide around the tragic death of George Floyd, the Black Lives Matter mural has come to signify a commitment to change led by the people and for the people.

An earlier version of this article stated that the Harlem Black Lives Matter mural was going to be the only one in Manhattan. Officials have since announced that there will be several throughout the borough.