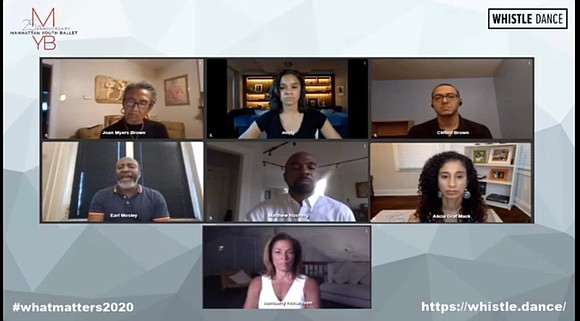 AAADT’s Clifton Brown called it a “special moment, a moment of sensitivity” in which people of all races and ethnicities are “open and willing to listen.” Capturing the spirit of optimism evident during the conversation, he added, “That is where change happens.” He noted that those people who in the past might have dismissed charges of injustice as the outrage of “just another angry Black person” are actually listening.

Putting today’s events in historic context was Joan Myers Brown, the award-winning founder of the critically acclaimed dance company and school PHILADANCO. She spoke as only one can who remembers the many historic struggles for civil and human rights and who belongs to the generation of Black dancers whose dreams of becoming a Black ballerina were dashed by institutionalized racism but who still managed to transcend despite it all.

“Having lived through World War II, the Korean War, the AIDS epidemic, everything,” Brown said, “I’m wondering why we are still having this conversation! Why is this still necessary? Why are we talking about the same things that should have changed years ago? Does it take the awful position that we’re in today to ignite it again? I had this same discussion in 1948, 1982, over and over again. It’s time, I think, now to talk about it and hopefully change happens so that it doesn’t continue and we’re still having the same conversation a few years down the road.” Asked if she thinks this is a different time with the rallying cry Black Lives Matter being heard around the globe, Brown said, “I’m not sure yet. I’m waiting to see. My dancers ask me every day ‘What are we doing next?’ and I tell them, ‘I really don’t know.’ We have to hope and pray that things change.”

Pointing to the title of the panel discussion, Earl Mosely weighed in, saying, “When I see these fires in Atlanta caused by people burning down Wendy’s I see Black souls burning. We’re tired of being apologetic. Get your knee off of my spirit!” Pointing to the Black dance institutions, like AAADT, Philadanco, DTH and others that have served as a beacon of hope for countless aspiring dancers confronting institutionalized racism, Mosely said their legacies have “given all of us voice” over the years. Now, he adds, what also gives him hope is “this diverse group of young people who are in the streets” declaring that Black Lives Matter. “I’m praying that many like them end up in these other dance companies and remind everyone that if there’s no justice for one there can be no justice for any of us.”

AAADT’s Matthew Rushing agreed, adding, “I’ve never seen a time like this where we have a captive audience for people to speak, for people to listen to each other’s voices. The younger generation is heavy on my heart and one of the reasons I’m showing up in this discussion is to educate, share ideas, give different perspectives.” And, like all of the panelists, Rushing expressed profound gratitude at being able to participate in what is hopefully the beginning of many more conversations like this one. A gratitude, it is safe to assume, that was shared by the hundreds of folks who listened to the conversation “My Dance, My Voice: Black Hearts Are Burning.”