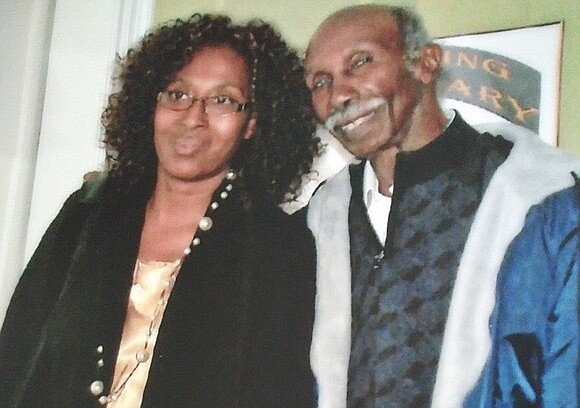 Lucien George Sr. was born the 27th day of October 1937 in St. Thomas, U.S. Virgin Islands. He went to be with the Lord on the 5th day of April 2020. His loving wife Jacqueline Wade George was with him at Mount Sinai Morningside-St. Luke’s Hospital when he transitioned.

Lucien George Sr. was the eldest son of Abraham Agustus George and Augusta Marie Dawson–Donovan. At an early age, Lucien had a talent for singing and would sing all the time. Lucien went to Lincoln Grade school in St. Thomas, U.S. Virgin Islands. He attended a few years of high school. He loved learning. He also helped out at home with caring for and watching over his younger brothers and sisters. He was a loving big brother and a mama’s boy. As a boy and teenager, Lucien Sr. helped to support the  family. He started out working as a bus boy and became a waiter at Bluebeard’s Castle Hotel. Lucien Sr. also loved to swim in his free time.

Lucien Sr. moved to New York in 1958 with his first wife Carmen George and their first born son, Lucien Lou George Jr.  Lucien Sr. always had a great love for music. His favorite R&B music acts were the Temptations, Jerry Butler, Ben E. King, The Drifters, Sam & Dave and many others. Lucien used to sing with many doo-wop groups in the neighborhood such as a popular local group at the time by the name of The Criterion’s. Lucien Sr. had an especially great ear for harmonizing. He loved to rehearse and perform. When he performed, it was amazing. He also dressed and danced beautifully when he performed.  He would later instill his music chops in his three sons: one day, he heard his second son Paul Anthony George singing in the bathroom. He then recruited his two other sons Lucien George Jr., and Brian George to sing as a trio. He practiced with them, mentored them and taught them the arts of singing and vocalizing with harmonies. He would also have them singing on street corners and subways as crowds applauded them. His sons were his life, his world. He dreamed big things for them.  Later, his younger brother Cito George would help Lucien Sr. cultivate them as a three-man singing group. Lucien Sr. also had his son’s mother Carmen and Grandmother Amancia sew and make their earliest outfits. In the late ’60s/early ’70s, Lucien Sr. and his brother Cito would take the boys to the Apollo Theater where they achieved huge success winning first place four times in a row at the Apollo Theater Wednesday night “Amateur Night.”

Lucien Sr. later joined forces with his son Lucien Jr.’s college friend Steve Salem to form a management partnership where Full Force was born with his three sons and their three cousins, Gerry Charles, Curtis Bedeau and Hugh Shy Shy Clarke. In the ’80s, Lucien Sr. would be in the studio with them when they worked with such artists as Patti LaBelle, Howard Hewett, Lisa Lisa & Cult Jam, Cheryl Pepsii Riley, UTFO and James Brown amongst others. Mr. Brown gave Lucien Sr. the nickname, Papa Force. It was always about the work for Lucien Sr.

Lucien Sr. was also a member of GCIU Local 119B (the printer’s union.)  Lucien worked as a professional union printer for over 32 years. Lucien  got his nephew David a job through his union. Lucien was always looking out and helping others, especially members of his family. He never preached about what he did; he often said, “Actions speak louder than words.”

Jacqueline Wade George, Lucien Sr.’s, second wife, was married to Lucien George Sr. for over 15 and a half years until he passed away. Even though Lucien Sr. was many years older than Jacqueline, they got along really well and were soul mates. They first met in Brooklyn and were introduced by Jacqueline’s hairdresser who was also Lucien’s good friend. After seven years of dating, they married on August 27, 2005 in a church ceremony in Philadelphia surrounded by friends and family. Lucien was always very supportive and encouraging of Jacqueline’ theatre work, film work, articles, research, teaching artist positions, volunteer work and  human rights activist work. He loved her creative spirit and mind. He became one of her mentors. He was also one of the producers for several of her plays and various projects. He was her first co-producer on her play, “Black Panther Women” and the play “Miles Davis,” at La Mama E.T.C. Whenever you saw Jacqueline at rehearsals, performances, film shoots,  events or demonstrations, you always saw Lucien Sr. Jacqueline also helped Lucien to battle against Parkinson and Lewy Body Dementia during the last 10 years of his life. Jacqueline and Lucien were the best of friends. Lucien nicknamed Jacqueline his Boobe and Jacqueline nicknamed Lucien her Boobe. Lucien always sang to Jacqueline with his amazing voice. It always made her smile. Jacqueline always encouraged him to sing and write songs. They shared many beautiful years and memories together.

Lucien Sr. also went to City College to attend night classes to work on his GED with the encouragement and help from his wife Jacqueline. Lucien Sr. respected education and encouraged and supported Jacqueline in getting her first master’s degree along with encouraging her to work  on her second one while she worked. He was Jacqueline’s rock and she was his. Jacqueline also encouraged Lucien who had a great fear of heights and of flying to travel back to St Thomas, U.S. Virgin Islands to visit his family and friends after he had been away for over 40 years. Jacqueline surprised him with a cruise to take him home. This meant a lot to him. They traveled together many times after that to his homeland. Whenever they flew, Jacqueline made sure he was safe. Lucien also loved taking adventurous road trips by bus and/or train with Jacqueline throughout the United States, Mexico and Canada to many new and exotic interesting places throughout their marriage. Lucien loved it. Lucien also always looked after Jacqueline. When 911 occurred in New York City, Jacqueline was stuck on a number 4 subway train underground between Fulton and Wall Street as the World Trade Towers were coming down. The subway train bolted into Brooklyn as the ground shook. Lucien walked from his job three miles away and waited for Jacqueline to arrive at her job safely in Brooklyn to protect her and take her home.

Lucien Sr. loved to visit his friends and buddies at his special diner in Brooklyn. He always had a big smile and greeted everyone. He had a hearty laugh when he saw them. He was loved by all and considered the Mayor of the Diner. Lucien also loved going to outdoor concerts, festivals, dances, the Apollo, apple picking in the fall at farms, museums, art galleries, lecture series, retreats, demonstrations,  play performances, Broadway musicals,  and the opera with Jacqueline. Jacqueline and Lucien also shared a love for walking everywhere. Lucien would often take long walks with Jacqueline through Central Park, parts of Harlem, and East Harlem and or parts of Brooklyn. He would tell her stories of how he had sang on street corners with doo-wop groups including with Frankie Lymon when he was younger. In recent years, after Lucien stopped walking, Jacqueline would often take Lucien to Central Park in his wheelchair when he was staying at the New Jewish Nursing Home. They listened to music  while they both ate ice cream cones. Lucien Sr. loved to sing along with the music every chance he got. Jacqueline loved to surprise Lucien Sr. Jacqueline recalls taking Lucien to the Rainbow Room at Rockefeller Center for his birthday when they were engaged and singer Ruth Brown was performing. Lucien sang along with Ruth Brown as she performed. Ruth Brown came over to their table after hearing his beautiful harmonizing voice and had Lucien join in a duet with her. It was mesmerizing.

Lucien also assisted Jacqueline when she was a caregiver for sick relatives. He was always supportive, helpful and kind. He gave to others freely. Lucien was Jacqueline’s caregiver when she was sick.

Lucien also loved going to Orchard Beach every summer with Jacqueline. Lucien called the water the healing water when he was brought to the ocean and he was put in it. It made him feel free from Parkinson. Lucien also loved having long talks about life, family, art and God with his father-in-law, Prof. John Wade, Sr. They had a special bond. Jacqueline’s entire family accepted, embraced and loved Lucien Sr. dearly.

Lucien Sr. was also a member of the Church of the Living Hope in East Harlem with his wife Jacqueline. Lucien Sr. was a peaceful kind loving man with a beautiful spirit and lovely smile. He had a big generous heart and always loved to teach (he coached singing) and encourage others including strangers. He was a dreamer who made things come to life and fly. He was also a  loyal and fair  person. He had a great deal of empathy. He was always there for those in need. If he was your friend, he was your friend for life. He was a positive force, a quiet, silent warrior, who tried his best never to hold a grudge. If he didn’t agree with something, he was often silent and he found a way to work through it. He had discernment, inner wisdom and peace. However, he was still a Scorpio with a long memory. If he had to put you in your place, you would know it. Some would call him an old soul. He had learned many things from life’s lessons. He also never complained about having Parkinson. It was part of life. It was always about being positive and proactive. Jacqueline enrolled Lucien in Juilliard’s Dance for PD which he loved. Jacqueline and Lucien attended aquatic therapy for several years to get his mobility better. He also worked with his punching bag and did exercises daily. He was always in PT and OT. He loved working with Andrew Suseno with movement and physical therapy. When Lucien stopped walking in September 2019, he kept trying to walk. He also  kept exercising and continued to grow in inner strength. He was a champion among champions that never stopped fighting. In his last two and half  years of life, he also took up painting. He found freedom and enjoyment in it. Lucien was always willing to learn and try new things no matter what he was going through. Lucien’s greatest medicine was having God, Jacqueline, his sons, music, singing, and loved ones, friends and support around him. He was a fighter till the end. Jacqueline, his dedicated and devoted wife and best friend, took care of  Lucien Sr. till the end. Lucien was a precious gift from God, an exquisite  jewel  for Jacqueline. Lucien Sr. will be missed.

On April 5th, Lucien George Sr. gained his heavenly wings. No more suffering, no more pain. His passing was not in vain.