'Princess and the Frog' ride coming to Disneyland and Disney World 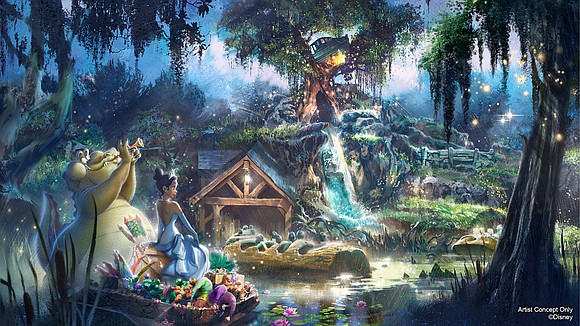 Splash Mountain in Magic Kingdom Park at Walt Disney World Resort in Lake Buena Vista, Fla., will soon be completely reimagined, inspired by the animated Disney film “The Princess and the Frog.” Guests will join Princess Tiana and Louis on a musical adventure as they prepare for their first Mardi Gras performance, featuring some of the powerful music from the film. Disney

The Walt Disney Company announced Thursday that it's replacing the theme of its iconic Splash Mountain ride at Disneyland in California and Magic Kingdom park at Walt Disney World in Florida, which is based on the 1946 Disney movie “Song of the South,” with a theme based on the 2009 animated film "The Princess and the Frog."

The new theme for the ride will feature main characters from “The Princess and the Frog” including Disney’s first Black princess, Tiana, and Louis on a musical adventure in New Orleans during Mardi Gras.

“Like Princess Tiana, I believe that courage and love are the key ingredients for wonderful adventures,” said Charita Carter, senior creative producer at Walt Disney Imagineering. “I am delighted to be a part of bringing this fun-filled experience to our guests.”

The move comes as several companies revamp racial imagery. "Song of the South," which the Splash Mountain ride is based on, features Black actor James Baskett as Uncle Remus portraying a worker on a Southern plantation during the Reconstruction Era. Remus tells stories to white children in the live-action and animated movie.

Baskett earned an Academy Honorary Award for his performance in the film. The movie is best known for the song "Zip-a-Dee-Doo-Dah,” which won the 1948 Academy Award for Best Original Song.

“Song of the South” has been criticized for years over its stereotypical portrayal of African Americans many deemed racist and offensive. The film has not been released by Disney on video or DVD and it is not available on the Disney+ streaming service.

The controversial Uncle Remus character does not appear in the Splash Mountain ride and features animated characters from the movie including Br'er Rabbit, Br'er Fox, and Br'er Bear.

Actress Anika Noni Rose, who voiced Princess Tiana in “The Princess and The Frog,” said it’s exciting that Princess Tiana and the movie are going to be a permanent fixture a Disney’s theme parks.

“As passionate as I am about what we created, I know the fans are going to be over the moon,” she said. “The Imagineers are giving us ‘The Princess and the Frog’ Mardi Gras celebration we’ve been waiting for, and I’m here for it!”

Disney officials will release a timeline for Splash Mountain's new theme at a later date.