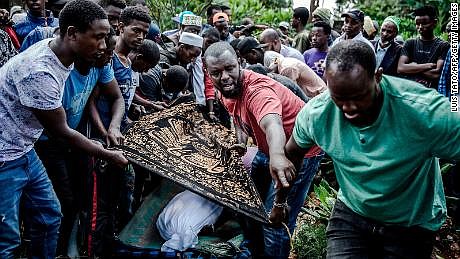 In a recent march against police violence, some 200 demonstrators filled the streets, carrying signs reading “Life is Priceless,” “Save our Future” and “Never Again.”

But the protest was not in Minnesota or Oklahoma. It was in Kenya, where police have been filmed beating people at markets or as they return home from work. The authorities claim to be enforcing a dusk-to-dawn curfew using billy clubs, tear gas, and live bullets.

Police have also broken into homes and shops, extorted money from residents or looted food in locations across the country. Following criticism from various groups, including by Human Rights Watch, Pres. Uhuru Kenyatta apologized generally about police use of force, but did not instruct the police to end the abuses.

As reports of police killings in the U.S. are circling the globe, Kenyans are echoing their outrage at police violence, including the deaths in the past few months of some 15 people since Kenyan authorities imposed a coronavirus curfew in late March. Among the victims was Yassin Hussein Moyo, a 13 year old boy who had been watching the action in the street from his mother’s upstairs balcony.

His shooting prompted some 200 residents of Mathare, a densely populated settlement in Nairobi, to march in the streets, carrying signs with the names of friends, neighbors and sons killing in police operations in recent years.

“I am here to protest for our youth who died in the hands of the police without any wrongdoings and we are saying enough is enough,” declared Rahma Wako of Mathare.

Kenya has a long history of police use of excessive force, either in informal settlements or in response to demonstrations, often resulting in unnecessary deaths.

“Arresting the killer of Yassin Moyo is not going to bring Yassin Moyo back. What is justice really? Justice is preventing (children like) Yassin Moyo from being killed, and that is what we need IPOA and this government to do.”