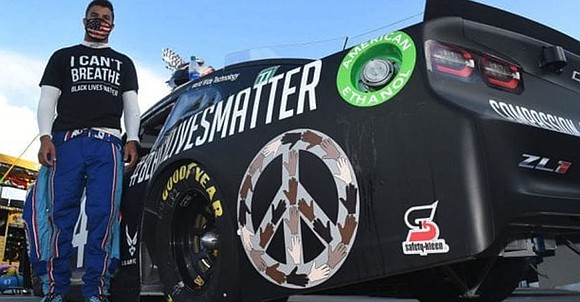 It’s not shocking that there’s been some backlash to all of the newfound attention and empathy given to the plight of the Black man. Since Amy Cooper’s attempt to have a Black man falsely arrested in Central Park, and the outrightly heinous, senseless Memorial Day murder of George Floyd by the now former policeman in Minneapolis, the number of non-Black sympathizers to the plight of the Black man and the social issues and problems that have been important to the Black community have somehow grown exponentially.

All of the recent protests and civil unrest have featured a large pop contingent and gained some unexpected allies in this latest episode in the fight for justice. But there will always be some backsliding and holdouts.

It’s been reported by NBC News and the New York Post that a New York Police Department lieutenant who publicly kneeled with protesters had a change of heart and apologized to his colleagues for becoming a sympathizer to the movement.

The midtown Manhattan lieutenant now believes that he “made a horrible decision to give into a crowd of protester’s demands” by kneeling alongside other officers.

Of course some habits and traditions are hard to break. NASCAR’s ban on the use of the confederate flag has irritated one or more of its patriots so much so that a hangman’s noose was left in a secured garage area where stock car racer Bubba Wallace’s #43 car was parked for this week’s GEICO 500 at Talladega Superspeedway in Lincoln, Alabama.

Wallace, 26, is NASCAR’s only Black full time racer. He’s contracted to race for Richard Petty Motorsports. He’s been with them since 2018. His contract was recently extended for two additional years.

Wallace recently led the action to have the confederate flag, a very popular NASCAR fan item, completely banned from the racing circuit after Floyd’s murder. NASCAR had distanced themselves from the flag several years ago, but not from fans who still embraced it. Now, fans are no longer allowed to display the flag on NASCAR grounds at all. But note, this week, they were in Alabama, the “Heart of Dixie” where racism was bred and Jim Crow laws were ratified and then refined. During the time of the Civil Rights Movement in the ’60s, you could accidentally spell racism, A-L-A-B-A-M-A and not be considered wrong.

The noose, found by a Petty team member, is now being investigated by the FBI. Possible suspects could be whoever rented the plane to fly their confederate flag and a DEFUND NASCAR banner over the speedway, or the numerous fans outside Talladega proudly displaying their flags. In total, there are a large number of suspects, but the noose was found in an area that only essential personnel would have access to.

The NASCAR family, drivers, pit crews and personnel, all rallied behind Wallace at the start of the race in a show of support and unity. Famed Hall of Fame driver and racing icon Richard Petty joined them. The front of Denny Hamlin’s car, a competitor, was even wrapped with the logo of the National Civil Rights Museum, a move by Hamlin and his sponsor, FedEx, in support of the ongoing fight for racial equality.