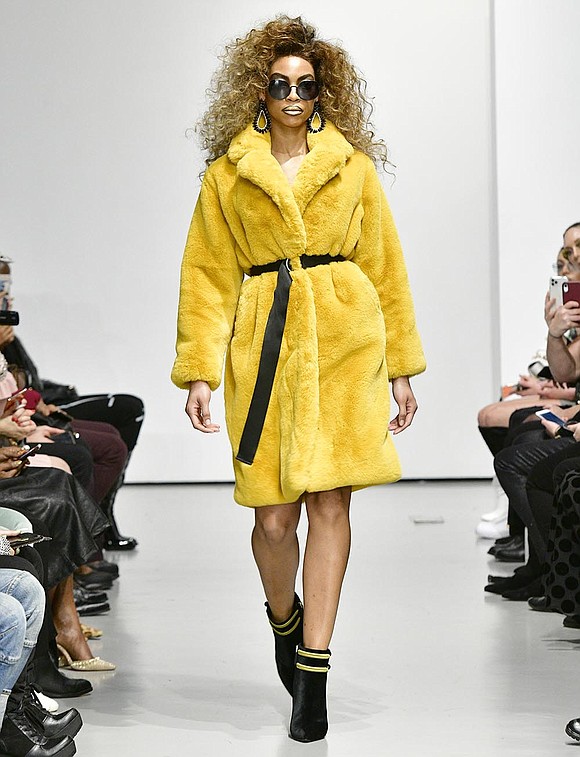 At Negris LeBrum’s NYFW show, the color black and leather looks ruled. Whether models strutted down the runway in a slithery black leather sheath with long sleeves, or a suit, the look was always chic. For accents, there were silk gold blouses and jackets that popped with their black separates. Lengths varied from long to short, mostly below the knee. Skirts were flared or tapered. Their golden belted, faux fur coat rocked. For evening, there were several opulent ensembles that simply stunned the audience. This brand has a long-standing usage of black in their collections. Their leather looks received applause. The Negris LeBrum brand also focused on furs, wools, and gold silk prints.

African American designer Travis Hamilton was inspired by the glamour of the 1980s. On the runway, hairstyles and makeup were influenced by styles of Prince’s “Purple Rain.” For fall 2020, the attitude is all about sex appeal, and looking fabulous in your clothes.

Designer Vivienne Hu showed a very classic yet cowboy chic collection at NYFW. She paid tribute to Americana and the romanticism of the southwest in her fall 2020 collection. The show was exciting at Spring Studios. The women’s ready-to-wear, 40-piece collection captured stylish cowboy essentials, dreamy fighter pilot leatherwear and smartly tailored down jackets. Hu’s multi-hued faux fur jacket stood out.

Hu’s pants were newsworthy. They were shaped and cut to a point, just above the ankle. Shown with boots, cropped cuffs of pants were trimmed with beads, embroidery, rhinestones and braid. Leather jackets were belted. Down outerwear looked warm, cuddly, yet glamorous.

“I was inspired by the beauty and sheer magnitude of the great American Southeast,” commented Hu after the show. “I think it was Antelope Canyon that first stole my breath away.” The collection was feminine. Silhouettes were classic with modern details. Her architectural structures were strongly influenced by b the spirit of downtown New York.

In this collection, she captured the nostalgia of witnessing the natural grandeur of the west. She collaborated with sustainable fur producer, Saga Furs, and luxury Danish jewelry line, Shamballa Jewels. A diamond and gold embellished gown closed the show.