‘Blues For An Alabama Sky’ has a timeless message 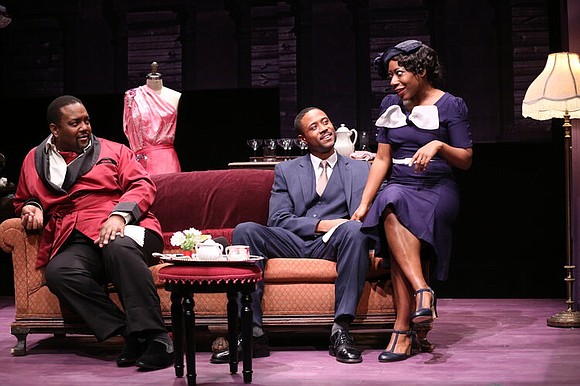 Pearl Cleage in a visionary! Her work, making its New York debut after being performed for 25 years throughout the country, was conceived before its time. “Blues For An Alabama Sky” playing at Theatre Row on 42nd Street and being presented by the Keen Company, tells the story of four friends living in Harlem in the summer of 1930, during the Harlem Renaissance. The audience is introduced to Angel, a nightclub singer and Guy, a gay costume designer, who live together. Guy takes care of Angel and has been doing so for years. Angel, however is much more than a nightclub singer. Then there’s Delia, the church-going neighbor who is trying to open up clinics in the community for women to get their medical needs taken care of––including abortions, which at the time were illegal. Doc, a fixture in the community for many years, works at Harlem Hospital and has delivered many babies. Cleage gives a full picture of what Harlem was like then, it’s the Depression and many people are out of work. Entire families are living on the streets. People are doing anything they can to stay alive. It is also a time of intolerance towards homosexuals. Intolerance to the point that a flamboyantly dressed homosexual like Guy can be openly attacked and there are no repercussions. It is a time when people, especially those from the Southern states, view homosexuals as abominations. The audience is introduced to Leland, a downhome man from Alabama who finds himself attracted to Angel.

What is interesting about this play is watching how Guy is accepted by his friends, but people in his own neighborhood will attack him. But, he also has a set a friends that are other homosexual men and he will often go out with them. No matter what hatred he receives in his daily life, he is determined that he will always be himself. And, back then, one could imagine how difficult it was for gay men in this city. In 2020 homosexuals are still victims of hate crimes. It is just astonishing how no matter what happened to him he kept his eyes on the prize, which for him was to get to do costumes for Josephine Baker in Paris.

In the character Angel, Cleage shows a woman who is selfish to the core and only out for what she can get from people. Whatever is the bigger opportunity, she will take it. Yes, she faces disappointment in her life and feels used in different ways, but in the end she always seems to land on her feet, no matter the costs of her actions for others. I appreciated how Cleage did not give us a play with a happy ending, but she did give us a play with a real ending.

I don’t want to reveal any more about this play––but I hope I have whet your appetite. The writing is real and timeless. The same issues Cleage saw to write about 25 years ago are still happening today and will definitely resonant with the audience. The company of actors delivers these characters with humor, heart and depth. John-Andrew Morrison is absolutely stunning as Guy. Alfie Fuller delivers Angel to perfection. Jasminn Johnson is wonderful as Delia. Sheldon Woodley is marvelous as Doc. And Khiry Walker is powerful as Leland. This very talented ensemble’s work is brilliantly brought together by the extraordinary direction of LA Williams. The costumes by Asa Benally are fit for the period, as is the set design by You-Shin Chen. “Blues For An Alabama Sky” will run through March 14.