Julius Montgomery, a trailblazer at Cape Canaveral and elsewhere 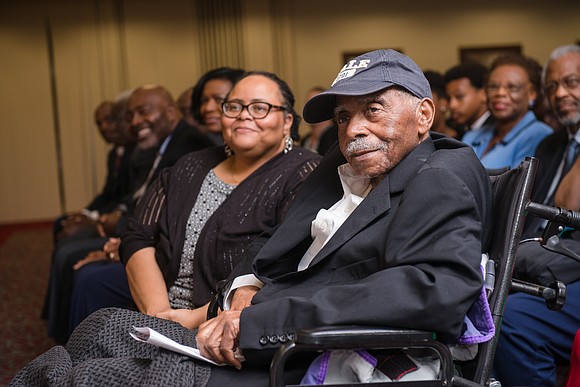 The recent passing of Katherine Johnson reminded me of Julius Montgomery, who, like Johnson, surmounted barriers and made his mark in the race for space as the first African American to employed at Cape Canaveral—and not a janitor.

In 1956, three years after Johnson began her rise to NASA, which evolved from NACA (National Advisory Committee for Aeronautics), Montgomery joined a team of technical professionals, then called “range rats,” who were responsible for repairing the electrical systems in malfunctioning missiles and satellite equipment.

It wasn’t an easy entry to the space program, as Richard Paul related in his profile of Montgomery. “As he remembered it, ‘I was a strange person coming into an all-white building. All white.’ As he entered his new workplace, the RCA Development Lab, ‘Nobody would shake my hand,’ he recalled. One by one each of his coworkers turned away. ‘I got to the last fellow,’ he said, ‘and I said ‘Hello, I’m Julius Montgomery.’ He said, ‘Look boy, that’s no way to talk to a white man!’” In a story indicative of who Julius Montgomery was––one he told many times during his life, ‘I said, ‘Ah, forgive me, oh great, white bastard. What should I call you?’ And I laughed, and he laughed and he shook my hand.”

He faced another obstacle two years later after his team sought to open a school to keep the professionals abreast with the latest developments. The plan was to call it the Brevard Engineering College with the notion of leasing classroom space at a public high school near the space center. But the timeless menace––Jim Crow laws––interceded to disrupt such a program.

A county superintendent refused to allow Montgomery to be part of the initiative and promised to shut the effort down before it was even launched. In order to allow the college to open, Montgomery stepped aside and withdrew his application. Three years later, after Brevard had its own facilities, Montgomery became the first African American student at the school now known as the Florida Institute of Technology.

Born on May 30, 1929 in Homewood, Alabama, Montgomery was the oldest of 12 children of Edward Perkins Montgomery and Queen Ester Jackson Montgomery. Their residence in Rosedale, the city’s oldest neighborhood, was first settled by former slaves after the Civil War.

Montgomery was afflicted with a terrible stutter that tended to isolate him from others. But with a determined effort, he overcame the problem and at the same time acquired the self-confidence that would be there when other challenges arose. He attended the Tuskegee Institute, now known as Tuskegee University, a historically Black college; he studied linotype and graduated in 1951.

Following graduation, after a brief stint working as a printer, Montgomery joined the Air Force until 1956. His tenure in uniform prepared him to be a radio engineer and he subsequently was employed in that capacity in Mobile, Ala. Seeking to improve himself with more lucrative jobs was blunted by repeated rejections because of his race. He had also gathered quite an expertise as first class radio-telephone operator, and believed this could secure him a job with the RCA, (Radio Corporation of America) and an avenue to a position in the space program.