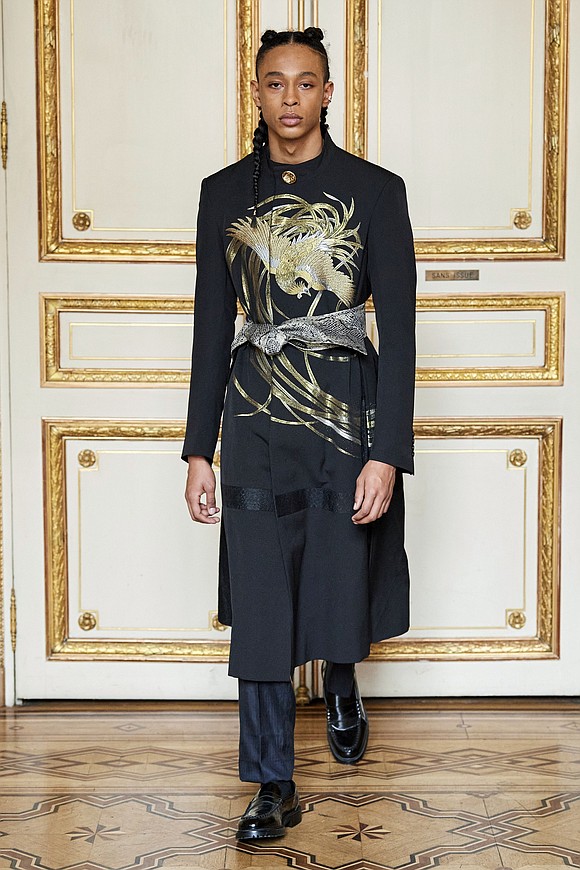 In Paris, France, New York fashion brand Hiromi Asai presented a magnificent fall/winter 2020/’21 menswear collection at the Salons de Maceau during last week’s Paris Fashion Week (PFW). The line was sprinkled with women’s wear pieces, too. The designer’s theme of the collection was ‘The Whole Creation,’ represented by unique natural motifs such as pythons, phoenixes and roses.

Inspired by these natural motifs, Hiromi Asai developed new textiles that were suitable for menswear. The collection was created by craftsman in Japan. They usually manufacture textiles for Kimono styles by traditional techniques. Hiromi Asai’s show demonstrated luxury and sustainable fashions. The looks were unique, the materials were mesmerizing. Utilizing outstanding tailoring techniques in Japan, Asai’s clothes were an instant hit with the audience.

The brand has revived the essence of Japanese kimono for modern luxury fashion. The designer, Hiromi Asai, first presented kimonos on the runway at New York Fashion Week (NYFW) in 2016. He developed his menswear line in 2017, and quickly gained international acclaim. His fall/winter presentation was shown along with other Flying Solo designers in Paris on Feb. 24, 2020. Hiromo Asia showed his collection at the recent fall/winter ’20 NYFW previews.

At their store, located on Prime Street in SoHo, New York, Flying Solo features the lines of other designers. Some are new to the fashion industry, yet they are all extremely talented. The store focuses on independent and emerging fashion brands that are now recognized as the biggest fashion platform of independent designers in the United States. Flying Solo produces fashion shows to demonstrate the latest collection of the designers during NYFW and PFW.