“Stew” sizzled with energy, family drama and vicious cycles that can befall families! 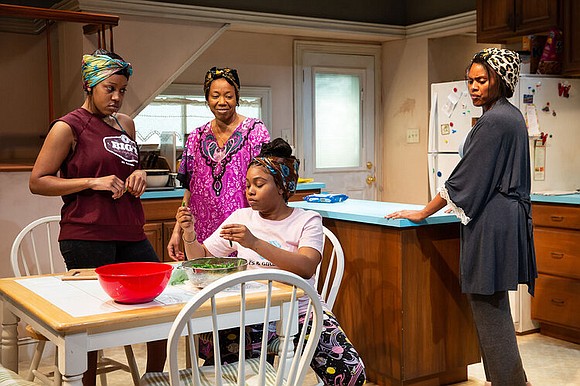 Zora Howard is a great talent. This playwright penned, “Stew,” a play that told the story of three generations of the Tucker family women and played recently at the Walkerspace at 46 Walker Street, presented by Page 73 Productions. The characters were Mama, passionately and brilliantly played by Portia; Lillian her older daughter, played with great heart by Niccole Salter; Nelly, Mama’s teenage daughter powerfully played by Toni Lachelle Pollitt and Lil’ Mama, Lillian’s daughter, delightfully played by Kristin Dodson. In this drama the Tucker ladies are making a stew for Mama’s church event, but while in the kitchen many family secrets are shared. You find out that the sins of the mother truly do visit on the children. And, sadly there are patterns that occur in families, that you just can’t seem to be able to get away from.

Families have issues like mothers feeling that their kids don’t make time for them and being very quick to go off on their kids when they do deem to come by. The arguments and conversations that occurred in this kitchen are conversations you can relate to. When you have a mother that can be a spitfire when started up, you try to point her in the direction of anyone else in the room, but she still manages to target and lock on coming after you.

Howard deals with the family members feeling neglected, avoided and vulnerable. She deals with an elderly mother having health issues and memory issues. Sadly, that is also one of the reasons that the family has come together and the mother is quick to confront them on this fact. The tension in this kitchen is so thick you could cut it with a knife. As Mama, Lillian and Nelly struggle through making Mama’s traditional stew, secrets in Nelly and Lillian’s lives are stunningly revealed. In the course of this play Mama is devastated from all different directions, being stunned by news from both Nelly and Lillian. It’s interesting however that when Lillian shares her truth, that her marriage is over, her mother’s reaction is not to berate her as she expected, but instead to reveal a secret to her about her marriage to Lillian’s father.

Howard definitely comments on the state of marriage, and how it can become tedious and suffocating to a woman. Although the women in this family were raised to believe marriage is forever and you just have to deal with the hard times. Marriage can also mean routine, and while sometimes couples like routine, other times routine it can be draining on the soul. What you see happen over the course of this play that is done without intermission, will have you shocked, make you laugh, but also make you think. Howard would have definitely had you seeing yourself and your family on that stage. I love plays that vividly and candidly demonstrate real life situations. There is another event that happened in this play, but I won’t say what. I’ll just say that there are startling moments to come if this play is mounted again.

The ensemble performances were mesmerizing, and delivered with a pure power of passion. Portia, Salter, Pollitt and Dodson had an amazing chemistry on stage and an energy level that was off the charts. And there was phenomenal direction by Colette Robert.