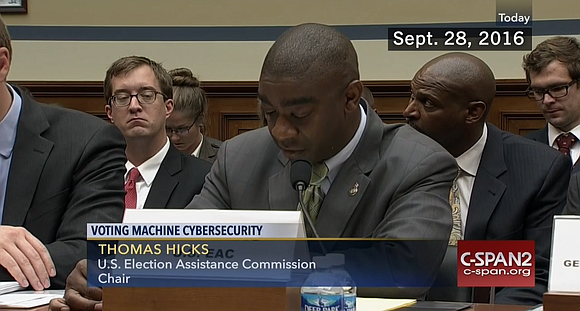 Is America’s voting process broken? Recent developments aren’t encouraging. For instance, in May of 2019 Sen. Kamala Harris along with twelve other senators, introduced the Protecting American Votes and Elections (PAVE) Act in the senate. It sought to mandate that states secure elections by use of a paper ballot and new cybersecurity standards for federal elections.

Republicans, though, led by Senate Majority Leader Mitch McConnell, have proven to be better at blocking bills than Hakeem Olajuwon was at blocking shots; the PAVE Act was just one of five election security bills Republicans didn’t even allow to come to the floor. They also give no indication of allowing any such bill to the floor, even in the face of reports by U.S. Intelligence just last month that Russia is currently attempting to interfere with the 2020 elections.

Harris and the other senators introduced the act after reports, from both Former FBI Head and Special Counsel Robert Mueller and members of the nation’s intelligence apparatus, found that Russia had, in fact, tried to influence the 2016 elections via electronic means, and continues to do so daily.

“Kill Chain” has Harri Hursti as our guide through the world of ignorance, malfeasance, and incompetence that is the current U.S. voting apparatus. One of the most famous hackers in the world, Hursti in 2005 hacked into U.S. voting machines to make the case that election security had been adulterated by the introduction of computers and the internet into the process. That hack was famously captured in a previous HBO documentary “Hacking Democracy.”

In jaw-dropping sequence after jaw-dropping sequence, “Kill Chain” makes it plain that Russia and quite likely other foreign actors are working tirelessly to invade America digitally, and steal the right of the average American to create a government that represents their interests.

What is even sadder, “Kill Chain” shows us that sometimes, it’s your own people doing America’s electoral process wrong. Republican politicians and corporate voting machine vendors who stubbornly refuse independent, government assessment of their hardware or software, are basically helping foreigners, not Americans.

“Kill Chain” shows election interference deniers’ main talking point is always that because the voting systems are so vast and of such great variety, it’s impossible to hack into the elections. But they are being disingenuous. That’s like saying shooting someone can’t kill them because humans are all so different. We’re the same when it comes to how to kill us. The voting process is different across the nation in a cosmetic sense but has certain vital aspects in common that, if breached, mean rigged elections.

If you remember the second season of the television show “Scandal,” where Olivia was depressed about turning a blind eye to a rigged election so Fitz could be president, you already know one of the ways “Kill Chain” points out that votes can easily be changed; memory cards. The memory cards (or thumb drives or any kind of removable storage) used by numerous counties’ voting machines is one of the most vulnerable points, providing easy access for anyone who wants to change election results. A skilled technician can simply remove the card and change the data.

Hacking into voting machines is just one possibility. Databases with constituent information can also be hacked, as shown in a number of examples in “Kill Chain.” In one shocking sequence, Thomas Hicks, chairman of the United States Election Assistance Commission testifies before Congress that the voting process is safe because there are so many different voting systems. We then learn that not only was what Hicks said not true, the machines in his own organization were hacked into by taking over the identity of one its employees. Yikes!

Voting machines are so vitally important that they’re all kept in super-secure hard-to-reach facilities, right? Not so fast. In “Kill Chain,” Hursti finds a voting machine by one of the top three vendors... wait for it… on eBay. The machines are the same ones still used in high school gyms, etc. across America for casting votes. Anyone with the know-how could use that eBay sourced machine to find vulnerabilities and exploit them. Hursti found out there are 1200 of them available for sale for about the same price as a Run DMC Funko Pop.

The final conclusion of “Kill Chain” is essentially that there’s only one way that ordinary Americans can start fixing a definitively broken voting system. Commented featured cybersecurity expert Jake Stauffer, “I’ve told voters before to be careful what you vote on. If you cannot validate it, if you cannot verify it in here right in front of you, then you shouldn’t be voting on it, you should be asking for a paper ballot.”