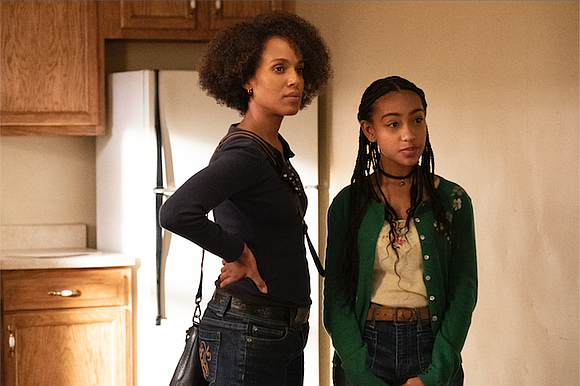 In Hulu’s new literary adaptation of Celeste Ng’s best-selling novel “Little Fires Everywhere” we take a deep dive into the lives of two women in different situations; both linked to a simmering and hidden level of frustration so agonizing that it’s dangerously close to rage.

This story is about the conflict that brews between a woman obsessed with propriety (Reese Witherspoon) and another who disregards and blows up rigid rules (Kerry Washington).

Here’s how it begins: in 1990s suburban Ohio, Elena Richardson (Witherspoon) is the master-of-her-domain which consists of her four children and husband (Joshua Jackson), but after taking on new-in-town artist Mia Warren (Washington) as a tenant and a domestic employee, she finds herself face-to-face with a woman she cannot control. What starts the slow burn is Elena’s complicated relationship with her younger daughter (Megan Stott), who feels a connection of spirit with Mia and her carefree world, plus she’s also battling with both the adoptive parents and birth mother of a young girl.

The Hulu limited series is only eight episodes. In this time frame, we have to learn how Elena and Mia ended up in their present circumstances. Looking at what shaped their personalities, Elena is equally hard on herself: weighing herself every morning, measuring her nightly wine in a measuring cup, and unleashing her rigid opinions on everyone in her sightline.

Mia’s need to keep moving doesn’t sit well with her daughter, Pearl (Lexi Underwood). Mia’s restless, but as Pearl grows up her desire for roots becomes a source of argument for the mother-and-daughter pair. It isn’t long before we understand Pearl’s point of view.

Is Elena a villain? I’m answering, yes. Her series of microaggressions is deliberate.

Why did Mia agree to become a servant to Elena? Does she secretly like being under the heel of a “white master?” I’m answering, yes—little fires everywhere, set by those people who want to finally get consumed by their own bad choices. Too deep? Maybe, or maybe not deep enough.

Why does this artist leave chaos in her wake? To find that answer you have to carefully watch Hulu’s “Little Fires Everywhere.”