“Ida B. Wells Place' is designated in Downtown Brooklyn 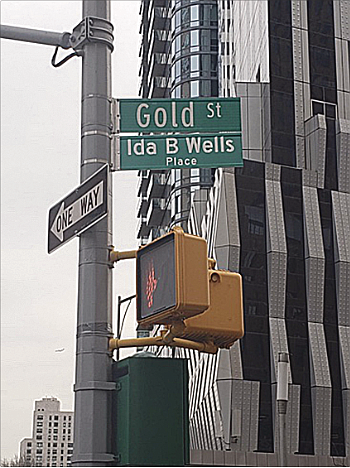 A new street sign in Downtown Brooklyn commemorates the life of Ida B. Wells, one of this nation’s most revered investigative journalists.

The official co-naming of Gold Street and Myrtle Avenue as “Ida B. Wells Place” took place on Saturday, March 7, 2020 and was attended by Wells’ great-grandson Benjamin Duster IV along with his family, the author Paula Giddings, members of the Brooklyn NAACP, New York Times journalist Nikole Hannah-Jones, NYC Council Member Stephen Levin and supporters of the Harlem Historical Society.

The Harlem Historical Society led the push for the newly minted street signs and the informational plaque detailing Wells’ life in Brooklyn.

Wells was born into slavery in Holly Springs, Miss. and moved to Memphis, Tenn. with her siblings after her parents died from yellow fever. In Memphis, Wells was a teacher and began writing for local Black newspapers—she was particularly known for writing about how whites used the threat of lynching to terrorize African Americans. The power of her words led a mob of whites to burn down her newspaper office and Wells was forced to flee for her life.

Before moving to Chicago, Illinois where she married and became a nationally known figure, Wells had moved to Brooklyn and continued her work while living in a home located at Gold Street and Myrtle Avenue—an area now dominated by the office campus known as MetroTech.