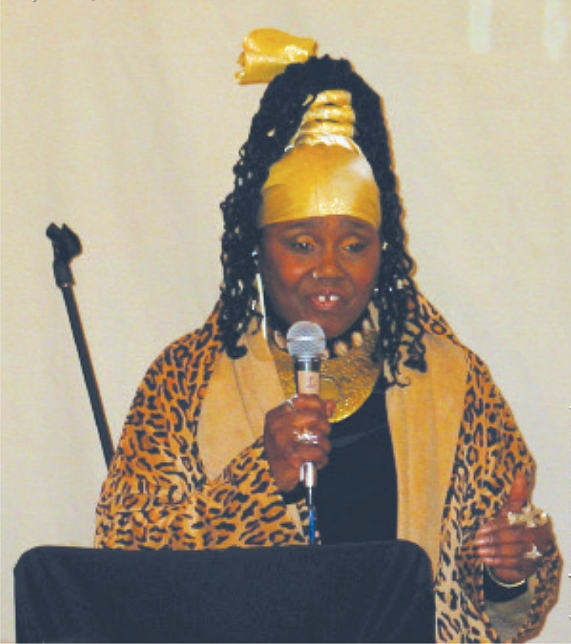 Activism is in the air on what seems like a quiet, nondescript street in Downtown Brooklyn. Demonstrators have been fighting to save the house located at 227 Abolitionist Place (formerly known as Duffield Street) from an impending demolition.

abolitionists, Thomas and Harriet Lee-Truesdell who had reportedly used the home as a station on the Underground Railroad. Chatel passed away on Jan. 8, 2014 but while she was alive, Chatel fought

battles against the Michael Bloomberg administration and millionaire developers to maintain her ownership of 227 Duffield.

When Bloomberg was mayor in 2004, NYC’s Economic Development Corporation (NYCEDC) announced that as part of its “Downtown Brooklyn Redevelopment Plan,” 227 Duffield and other nearby properties would be taken via eminent domain and demolished so that developers could create a new park and an underground parking lot.

The house, which was built between 1848-1850, had been owned by Thomas and Harriet Lee-Truesdell, prominent abolitionists during an era when people of African descent were being enslaved. Their role in the abolitionist movement, coupled with their relationships with other active abolitionists in Downtown Brooklyn, led New York City’s own researchers to conclude that the property was “quite possibly” linked to the Underground Railroad and the majority of historians commissioned by the city to review its research advocated for the home’s preservation.

Despite this historical documentation and the presence of several unexplainable architectural abnormalities in the sub-basements from 227-235 Duffield St., New York City initially concluded that the home’s historic significance did not warrant its preservation. But by 2007, in response to litigation brought by Chatel with the assistance of South Brooklyn Legal Services and Families United for Racial and Economic Equality (FUREE), the City agreed to redraw its economic development plans for Downtown Brooklyn so that the condemnation of 227 Duffield would not be necessary. To celebrate that victory, then-Councilwoman Letitia James co-sponsored a bill that renamed Duffield Street between Willoughby and Fulton streets “Abolitionist Place” in December 2007.

Today the house sits one block away from Brooklyn’s City Point mall; it’s on a street with three new hotels and a few recently opened luxury rental buildings. 227 Duffield is today, though, again under threat because the house’s new owner, Samiel Hanasab, has filed demolition permits and plans to build a 13-story, 21-unit apartment building in its place, according to the website Brownstoner.

"We got involved with this back in May 2019,” Anna Donn, executive assistant and program associate at Circle for Justice Innovations (CJI), noted in a recent interview. “We work 2 blocks away and our director, Aleah Bacquie Vaughn, would pass the house every day while walking to work. She saw the references to slavery and the picture of Harriet Tubman and since we work on issues like mass incarceration we obviously made the connection between slavery and criminalization and incarceration issues today.”

Imani Keith Henry, founder of Equality for Flatbush, explained, “We want to have this house saved, landmarked, and made into a museum. In late January we heard that the LDC was going to rule

against saving it, so on February 3 we launched the ‘Abolitionist Challenge.’ We have multiple strategies and we’re using multiple direct actions to save this house: we’ve been speaking out to media, at churches, at film festivals—we’re out talking to the world about this in all the ways

Most recently, NYC First Lady Chirlane McCray spoke out about the need to preserve 227 Abolitionist Place. McCray is on record urging that the Landmarks Preservation Commission review the significance of the property. And Jason Salmon, a former staff member for State Senator Velmanette Montgomery who is now campaigning to take her place epresenting Brooklyn’s 25th District, sent a letter to the LPC on Feb. 27 also urging the organization “to do the right thing and declare the home of the Truesdell’s on 227 Duffield St. a historical landmark.”