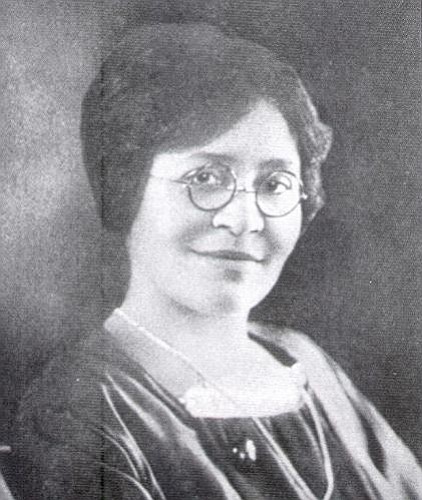 Invariably, with study and research of Madam C.J. Walker, Annie Turnbo Malone is mentioned, and she gets a little more than a passing nod in the recent Netflix bio-pic of Walker. In fact, some fans and devotees may take exception to how she’s depicted, particularly the fictionalized fight scenes between them.

But like so many of the columns here, one luminary leads to another, and Annie is the woman of the moment, mainly because she is often overshadowed by the fame and wealth Madam Walker acquired. Even so, she deserves her own story, her own claim to recognition and achievement.

This will be a redo on Annie’s life and legacy in these pages, and the provocation comes from the Netflix feature, much in the same way they stimulated a fresh round of discussion on the assassination of Malcolm X. Two years ago, thanks to Shomari Wills’ book “Black Fortunes,” we learned much about Annie accomplishments.

Wills opens his chapter on Annie with a pivotal event that presaged her founding of the Black hair industry. “As her small fingers wove through her sister’s thick, curly hair,” Wills wrote of Annie’s early genius, “two of her sister’s friends, Lilly and Bea, sat a few feet away at the kitchen table, making small talk and watching Annie. ‘She’s got the knack,’ Lilly said. ‘She can do hair like nobody’s business.’ ‘And it’s going to be my business,’ said Annie as she continued to wrap sections of her sister’s hair around her fingers and then weave them together.”

This moment was a seminal moment in Malone’s life, a life that began Aug. 9, 1869, according to Wills, in southern Illinois, where she was the daughter of formerly enslaved Africans Robert and Isabella (Cook) Turnbo. The advent of the Civil War was just the opportunity her parents needed to transform their lives. Robert joined the First Kentucky unit of the Union Army, and Isabella, with the children in tow, escaped from Kentucky, which, though neutral, maintained slavery.

Isabella traveled secretly down the Ohio River until she reached Metropolis, Ill., a relatively safe refuge, where Annie was born, and the 10th of 11 children. She was still a toddler when her parents fell ill and died within months of each other, leaving her an orphan. For a short period of time she attended public school in Metropolis before moving to Peoria, Ill., to live in 1896 with Ada Moody, her older sister.

In Peoria, Annie attended high school, but because of frequent illness she had to withdraw from classes. It was during this school-less phase that she began to devote more time to hairdressing. From her brief lessons in chemistry while in high school, she had acquired enough knowledge to begin experimenting with various hair care products. At this time, many women used goose fat, heavy oils, soap or bacon grease to straighten their curls, a treatment that often left the hair and scalp damaged.

By the early 1900s, Annie was living in Lovejoy, Ill., with her siblings. She continued her experiments with hair care products, at last developing her own line of non-damaging hair straighteners and special oils, as well as hair-stimulant products for Black women. Wonderful Hair Grower was the name of her new product, and she began promoting and selling the bottles door to door. Soon, with each sale, the product gained popularity, practically revolutionizing the way Black women treated their hair. Explaining how Annie concocted her own elixir, Wills said she copied the ingredients used in cow ointment, that is, “petroleum, sulfur and lanolin or beeswax.”

To bolster her sales and to give her product wider exposure, Annie moved to St. Louis in 1902 or 1903. There, with her business thriving and seeking to capitalize on the World’s Fair of 1904, she hired three assistants who helped her expand the door-to-door operation. The business was boosted by her offer of free treatments, which greatly increased the number of customers.

“On one her of outings,” Wills said, “she happened upon a small apartment building in the colored section of town. She knocked on the door and she was greeted by a woman named Sarah Breedlove. Breedlove had a stocky build, brown skin, a round face with wide-set eyes and a broad nose. One of the first things Annie noticed was her hair. It was short and matted, and her scalp was dry and flaky and had bald spots.” After treating her hair, she offered Breedlove a job of selling her products, telling her she would make more money than she did as a laundress. Breedlove accepted and within weeks she was the best saleswoman in the region. Of course, she later changed her name to Madam C.J. Walker. It was around this same time that Malone married Nelson Pope, but by 1907 they had divorced. In 1914, she married Aaron Eugene Malone, a former teacher and religious book salesman. By now, Annie was worth more than a million dollars and wealthy enough to build a five-story multipurpose facility.

Given the size of the facility, there was space for her to develop a training school that became Poro College, which, by this time, in name, was an extension of Annie’s newly named Poro beauty products. Meanwhile, Breedlove, now Madam C. J. Walker, no longer satisfied selling Annie’s product, ventured out on her own, and soon matched her successor in the growth of her business and the acquired wealth.

Besides the rivalry and competition from Walker, Annie was having marital problems, and by 1927 her husband had filed for divorce. He demanded half of the value of the business, based on the claim that he was responsible for much of the accumulated wealth. The suit ended up in probate court and the college in receivership. The intervention of Mary McLeod Bethune led to a settlement of $200,000. The divorce was granted and Annie became the sole owner of Poro College.

After the divorce, Annie moved her business to Chicago, where she bought an entire block. But her ordeal in the courts was not over. Another suit against her was filed by a former employer, claiming credit for Poro’s success. She had to launch a fundraising campaign to meet the settlement, and it included the selling of her property in St. Louis. Even so, her business continued to thrive, and she was recipient of many awards and tributes, including an honorary degree from Howard University. Part of her legacy continues with a children’s home named in her honor.

May 10, 1957, Annie suffered a stroke and died at Chicago’s Provident Hospital. She had no children, but bequeathed her business and remaining fortune to her nieces and nephews. The value of her estate was estimated at $100,000. Annie’s charitable legacy also continues. The St. Louis Orphans Home, which was renamed after her in 1946, is now the Annie Malone Children and Family Service Center. The street on which the center is located was renamed Annie Malone Drive in her honor.