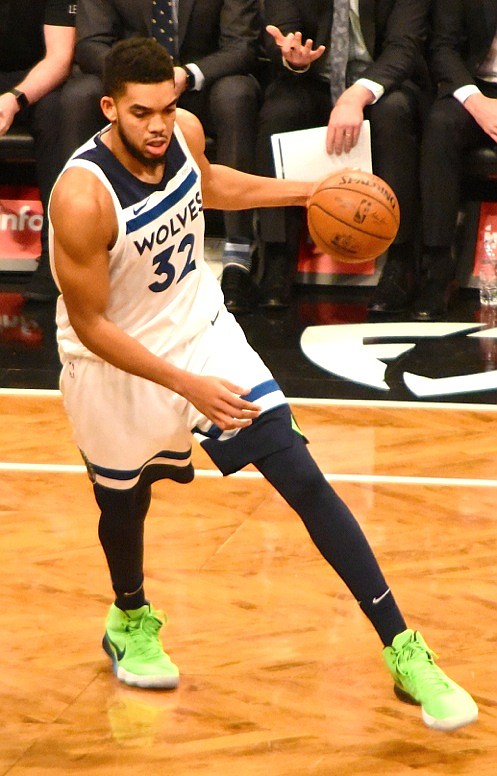 NBA All-Star Karl Anthony Towns, a native of New Jersey, and his family have been impacted by the coronavirus Bill Moore photo

When the novel coronavirus disease, COVID-19, initially entered the consciousness of the vast majority of the American public in late January, it was still an unknown variable as to how it would affect the daily lives of this nation’s roughly 350 million people. When a man in Washington State became the first confirmed person infected with the coronavirus in the United States on Jan. 21, the country was still collectively moving forward with its daily routines.

Work, school and social activities continued to function with normalcy. A little over eight weeks later, almost everything has come to a halt, as the pandemic has become a deadly scourge. Along with Washington State, it has hit New York and New Jersey harder than any other area of America. As of yesterday, there were, alarmingly, more than 30,000 cases in New York State and over 3,600 in New Jersey. Sadly the local sports circle is part of those numbers.

On Tuesday night, NBA All-Star Karl Anthony Towns, who was raised in Piscataway, New Jersey, and won a state basketball championship at St. Joseph’s High School in Metuchen in 2014, posted a video on Instagram imploring the nation to be vigilant in fighting the spread of the virus. Towns’ mother, Jacqueline Cruz, has been diagnosed with COVID-19 and placed in a medically induced coma.

“I think it’s important that everyone understands the severity of what’s happening in the world right now with the coronavirus, and I think where my life is right now [I] could help, so I decided to do this video and give you an update of where I’m at,” expressed the Minnesota Timberwolves center.

“I was told early last week my parents weren’t feeling well. My first reaction to her was to go seek medical attention immediately. There’s no reason to wait, just go to the nearest hospital. And after a couple days of not showing any signs of improvement, I was very adamant on the first day to go to a hospital and seek further evaluation.

“Her fever was never cutting from 103,” elaborated Towns in the nearly six-minute video, “and maybe go down to 101.9 with the meds, and then immediately spike back up during the night. She was very uncomfortable. Her lungs were getting worse, her cough was getting worse. She was deteriorating. She was deteriorating—and we always felt that the next medicine would help. This is the one that’s going to get it done. This mixture is going to get it done.”

The experience for Towns and his family is a cautionary tale for us all. “It’s rough, and day by day we’re just seeing how it goes,” he added. “We’re being positive; I’m being very positive. So I’m just keeping the strength up for everybody and my family.”

The prayers for Towns and his loved ones are palpable. As they are for the families and friends of Dave Edwards and Lee Green. Edwards, who electrified New York City high school basketball at Andrew Jackson in Queens in the late 1980s before a collegiate career first at Georgetown, then at Texas A & M in the early 1990s, died from complications of the coronavirus this week. Edwards had been coaching AAU basketball and mentoring youth.

New York City native Green played for St. John’s from 1991-’94. He later became a New York City police officer as well as a DJ, and remained close to the city’s basketball community.