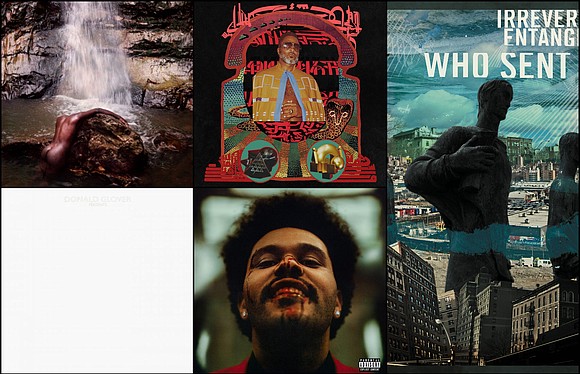 Our culture is experiencing the presence of an unprecedented global pandemic. In order to slow the spread of the menacing COVID-19 illness, people all over the world are being told to practice social distancing and self isolation as a proactive tactic to contain this new disease. We are concerned and ready to support each other in any way we can. We’ll be sharing a series entitled “Stealth Isolation” to share lists of five of our favorite artists, podcasts, record labels and so on. Please enjoy this list and reach out to us with what media you’d like to see highlighted.

Musicians and creative professionals are being hit very hard because of the inability to travel. We want to share five new albums that have recently been released or are due for release very soon. If you take a listen, you may find that these albums have futuristic undertones that can help us heal and imagine what art can be in this scary and technologically advanced era we are living in.

Moses Sumney has been on the verge of breaking through to the mainstream for some time now, but even more importantly, he has created a large cultural following, making him one of the best American artists to watch. The album “græ” was released on March 15 and fuses together soul, gospel and experimental music, making it a dreamy haze of powerful melodies. His vocal range is impressively vast. If you’re interested in listening to a musician who continuously pushes himself to create art, not just commercial music, you’ll want to check Moses out and support his new album.

Shabazz Palaces returns with the new album “The Don of Diamond Dreams,” which will be released on Sub Pop Records on April 17. Ishamel Butler is a Grammy-winning veteran artist who got his start in the 1990s with the iconic hip hop group Digable Planets. In 2011, Shabazz Palaces emerged as an afrofuturist duo with Tendai Maraire. The first single, “Fast Learner (Ft. Purple Tape Nate” is a laid-back throwback hip hop track that is an ode to “flyness.” This group’s music is layered with dope rhymes, smooth delivery and interplanetary vibes.

Irreversible Entanglements: “Who Sent You?”

The free jazz supergroup Irreversible Entanglements released their second full-length album on International Anthem. This global-minded, politically charged jazz ensemble’s new album “Who Sent You?” should be on the list of any music enthusiast and collector. The release and lyrics of this album are nearly prophetic as the band writes, “Stay on it! This is the future! This is the spectral dreaming, the reshaped soundwaves of post-Katrina, post-Osage Avenue, post-Obamacare that we borrow from to do this work, so stay on it,” in their digital liner notes. “Who Sent You?” is a powerful vision of the current times and what the future should be.

The Weeknd: “After Hours”

Canadian R&B artist, The Weeknd’s album “After Hours,” which was released on March 20, also seems to have had a glimpse in the future, as the album opens with a track titled “Alone Again.” This dark, moody album highlights The Weeknd’s most vulnerable moments; its theme seems to be that of isolation, loneliness and the need for escape. “After Hours” is a well-produced echo chamber that delves into the depths of sensuous human emotions.

Officially released on March 22, Childish Gambino’s newest release, “3.15.20” was mysteriously dropped on Donald Glover’s website on the 15th of March and was then pulled off the site. The album resurfaced and offers ambient and R&B soundscapes laid over his saintly voice. With tracks with titles like “Time” and “Algorhythm,” we find another album playing with the theme of the current technological era. “3.15.20” also features Ariana Grande and 21 Savage, but Childish Gambino is the star of this show with his flamboyantly passionate and diverse vocal expression. You’ll definitely want to give this album a listen.