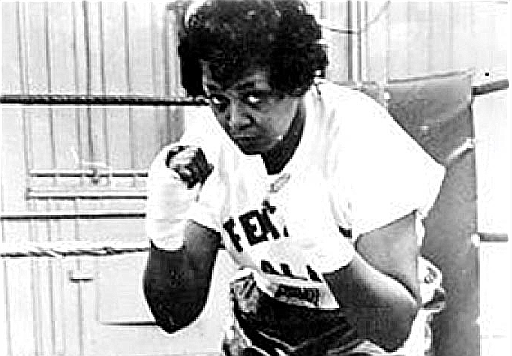 For her skills in the ring and her volubility, Jackie Tonawanda was known as “The Female Ali.” She was a pioneering fighter in the heavyweight division, though she found it difficult to get a license as a professional. After she sued the New York State Athletic Commission in 1975 the court ruled in her favor, but by this time she was well past her prime and lost her only professional fight.

Her record as an amateur, though, was unblemished and she won all of her 36 bouts, and even knocked out a male opponent in a contest that remains cloaked in controversy as to whether it was a staged event.

Born Jean Jamison in Suffolk County, New York on Sept. 4, 1933, she was sometimes known as Jackie Garrett. At eight years of age she was orphaned and by the time she was 13 one of her habitats was Gleason’s Gym in Brooklyn. As her boxing skills improved so did her size and she was soon a legitimate heavyweight at 175 pounds, and considerably larger than most of her future opponents.

Her size also made it difficult for her to find women able to match her weight, to say nothing of her skills. Most of her training and sparring matches were with men because, as she said, “the women don’t show me anything and they can’t take my power.”

One woman, Diane “Dynamite” Clark, apparently could take her punch and defeated Jackie in a split decision in 1979. Jackie said that fight never should have occurred since she was ailing and out of shape.

Her lawsuit against the N.Y. State Athletic Commission was denied because the commissioners believed that a female boxer’s reproductive organs and breasts would suffer too much trauma. Undaunted, Jackie forged ahead charging that women had every right to compete in the ring in just the same way that female wrestlers were permitted. While her case was being reviewed she competed in several martial arts tournaments at Madison Square Garden, where later, through the ingenuity of promoter Aaron Banks, she was inducted in the Garden’s Hall of Fame.

It was during a contest in one of the martial arts tournaments promoted by Banks that she defeated a male opponent in a mixed-rules event where kicking was allowed. The fight was a tough one and she suffered several serious blows before felling her opponent in the second round, breaking his jaw.

If her professional career was limited, she established an enviable record in other matches, many of which were unsanctioned, and eventually became the only female boxer member of Ring 8, the Veterans Boxing Association, which also inducted her into its Hall of Fame.

Jackie came into my life when she worked with my wife on her autobiography, that was never completed. Even so, she shared several folders of personal information and allowed me to accompany her to many events, including our inductions into the Garden Hall of Fame, she as a heavyweight boxer and me as a lightweight writer.