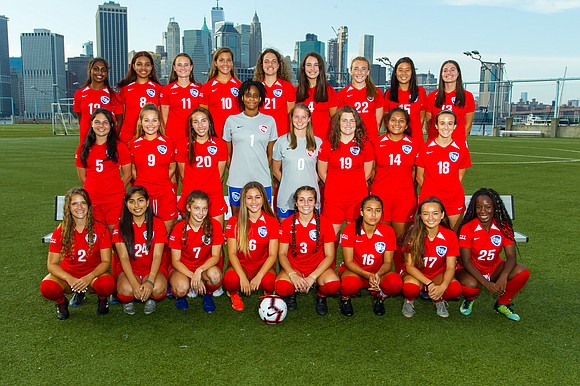 It was a rough inaugural season for St. Francis College women’s soccer, but the team is committed to unity. Training was going well when college sports were suspended due to the coronavirus. Despite that obstacle, the team found a way to come together as well as reflect the Franciscan mission of the college by partnering with Project Fleri, a non-profit organization involved with Haiti. The team will make a charitable donation to Project Fleri to sponsor a child in Haiti.

“Community service and being involved is an important foundation of our program,” said head coach Justine Lombardi. “We had quite a few projects set up for the spring, but unfortunately, those were put on hold. We thought about ways we can still help without being physically present.”

The coaches and players sent “Thinking of You” cards to a hospice center in St. Louis. Sophomore captain Sarah Dewitt brought up Project Fleri and invited founder Emily Booth to speak at a team Zoom meeting about the impact they could make in a child’s life.

“Her energy and her passion are so evident,” said Lombardi. “It has a really hands-on feel and personalized touch. You get to communicate virtually with these kids in Haiti. They send cards and video messages. That’s important for the team.”

St. Francis, which competes in Division I, announced the launch of a women’s soccer program in 2018. Lombardi was entrusted with putting the team together and competing.

“This was such an intriguing and interesting opportunity for me,” said Lombardi, who was previously assistant coach at Quinnipiac University. “It ended up being a perfect fit. One of my role models, Anson Dorrance, started a program at UNC (University of North Carolina at Chapel Hill) and has built this amazing culture and dynasty. He’s done some really great things, but also produced some really great people. The alumni and how proud and strong they feel about that program is something that resonates with me.”

Positive team culture is of paramount importance to Lombardi. Building a program from scratch is challenging, but she focused on bringing in good people. Players have come from near and far—from Manhattan to Australia.

“Bringing in good soccer players is important, but bringing in good people is even more important,” Lombardi said. “We lost every single game and it challenged and tested us at times, but it’s really brought us together. Through this pandemic and everything that we’re going through, we’re trying to stay connected. We’re actually having more personal conversations with the girls.”

While spring training and games are cancelled, Lombardi, her staff and the players are making the most of what they have. “If we use this as a chance to better ourselves as individuals and as a team collectively, we can bring that into a fall season,” she said.