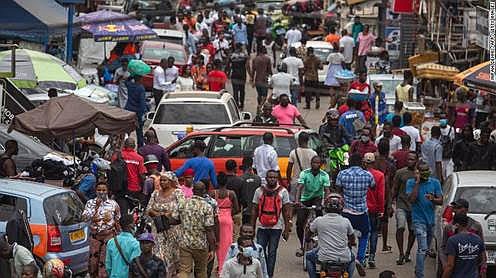 Speaking at a Sunday night national address, President Nana Akufo-Addo revealed that a single worker at a fish factory here has infected 533 co-workers, bringing the total number of infections to 4,700––the highest number in West Africa.

A super spreader event is a large COVID-19 infection cluster. The latest infection is part of a roughly two-week backlog of nearly 1,000 cases that had only just been reported, the president said.

Some 22 people have died of coronavirus-related causes, while 494 have recovered.

There are two large fish-processing plants in Tema, one owned by Thai Union Group PCL, the world’s top producer of canned tuna, and another owned by a local company called Cosmo Seafoods Company Ltd.

Abraham Koomson, the head of the Ghana Federation of Labor, said the 533 cases were at Thai Union’s Pioneer Food Cannery Limited plant and that the facility had closed down. He said a handful of Cosmo Seafoods workers had also tested positive.

With 160,501 tests since the outbreak, Ghana has carried out more tests per million people than any other country in Africa, the president said.

The government has been employing a “pool testing” strategy, which involves collectively reviewing up to 10 samples together and then only individually testing those in positive batches.

But as a result of the increased testing, Ghana’s case numbers will continue to rise above the current 4,700 confirmed infections in the country of 30 million.

“The more people we test for the virus, the more persons we will discover as positive,” the president said.

President Akufo-Addo’s speech comes three weeks after he eased a 21-day lockdown on the capital Accra and the city of Kumasi, in the center of the country, over concerns about economic repercussions for the many Ghanaians who work in the informal economy and live hand-to-mouth.

Ghana’s ban on mass gatherings and the closure of schools and universities will continue until the end of the month, he said.

Meanwhile, Veronica Bekoe, a Ghanaian public health official, has been traveling around the country introducing people to her invention, named the Veronica Bucket. A dustbin-sized plastic receptacle, it enables people to wash their hands in the absence of running water.