On the Run Rwanda genocide suspect nabbed in French hideout 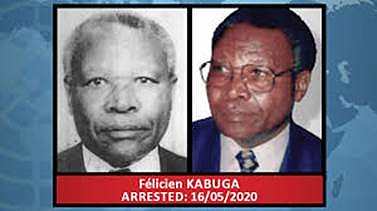 Twenty-six years after financing the Rwandan genocide, wealthy businessman and most wanted fugitive, Felicien Kabuga, was nabbed in an upscale French hideout.

It was a relief for prosecutors of the Rwandan Genocide tribunal who feared the 84 year old Kabuga could die a free man. He stands accused of masterminding the slaughter of 800,000 Rwandans, mainly minority Tutsis but also political opponents among the Hutus, over a period of 100 days, from April to July 1994, in a murderous campaign of ethnic violence.

Clues to Kabuga’s whereabouts came to light after an intelligence-sharing meeting between investigators from France, Britain and Belgium, as well as the U.N. and Europe’s Europol law enforcement agency. “We realized… that the trail from his children protecting their father converged on Asnières-sur-Seine, where he lived under an assumed name,” said Col. Eric Emeraux, head of a French police unit combating crimes against humanity.

“We also discovered one of his children was renting an apartment there.”

Because the coronavirus lockdown had paralyzed many intelligence operations across parts of Europe, time was freed up to focus on the man accused of being the economic backer of the genocide.

A former tea and coffee tycoon with 28 known aliases, Kabuga is alleged to have used his personal fortune to buy protection from a corrupt official in the office of Kenyan President Daniel arap Moi.

The International Criminal Tribunal for Rwanda said it had evidence that Kabuga either visited or resided in Kenya, but successive Kenyan governments allegedly refused to hand over the wanted suspect.

“We need to know the story of his life as a fugitive, who helped and protected him, his connections to the wider diaspora and the role of his children––all this might be a by-product of the trial,” said British journalist Linda Melvern.

Called the “preventable genocide,” the killings in Rwanda exposed a “disgraceful” failure of the international community as the U.N. ordered its blue helmeted troops to evacuate foreigners–– but not intervene to save the Tutsis from slaughter.

Kabuga, now confined to La Santé Prison in central Paris, appeared this week in court in a wheelchair, dressed in jeans and wearing a face mask. Prosecutors are seeking his transfer to U.N. custody for trial in international courts.

After his arrest Valerie Mukabayire, the leader of the Rwanda widows’ group Avega, told the BBC: “Every genocide survivor is happy he is arrested. Everyone has been waiting for this news. It is a good thing that he is going to face justice.”