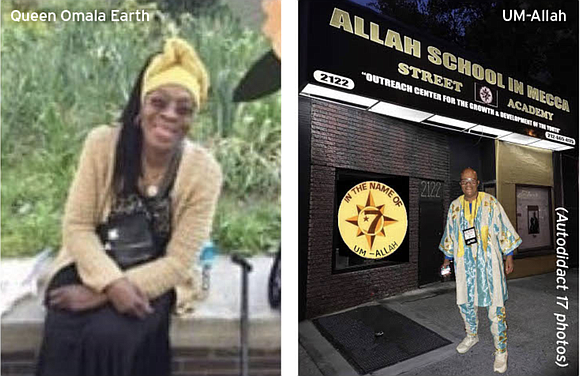 The recent passing of two first generation Five Percenters caused many people to reflect on their legacies. On April 1st, Queen Omala Earth-70 returned to the essence after a prolonged hospital stay due to severe health issues throughout the previous couple years. Then UM-Allah-73 passed on April 12th from suspected COVID-19 related issues. He was discovered in his apartment a couple weeks earlier and hospitalized shortly thereafter.

Both joined the youth group as teenagers, Omala in October 1964 after being inspired by neighborhood youths, including her brother Malachi; and UM-Allah during 1966 when he visited Allah, the Father at Mattawan State Hospital during a visit with Dumar Wa’de Allah.

UM-Allah was named Ronald Robinson after being born Aug. 31, 1946 in Harlem, and resided on 117th St. near Seventh Ave., and attended local public schools. After being attracted by the renegade Harlem youths known as the Blood Brothers, he joined them and took on the attribute of Universal Master, then abbreviated it as UM-Allah. He benefitted from the arrangement Allah had with Harlem Preparatory School headmaster, Ed Carpenter, and graduated from the college-bound high school in 1968 prior to enrolling at the University of California where he earned his Master’s degree, before returning to Harlem.

He was one of the handful of formally educated and well-behaved youths whom the Father brought along while meeting with politicians and other city officials. In later years he took what he had learned here and applied it during community board meetings to benefit the Allah School In Mecca, where he continued conducting classes for several decades.

Omala was named Cynthia Williams upon her birth on October 4, 1949, and grew up on 127th St. near Seventh Ave. Having been raised with First Born Black Messiah, First Born Prince and several others since elementary school; she became magnetized by The Five Percenters emergence in Harlem during Autumn 1964.

She became known as the “Second Born Earth,” being the second female to embrace the teachings, during the time when they were initially known as “Moons,” prior to the name change. She became a nurturer of many other young females throughout many years who soon sought the knowledge of self which was being disseminated among Harlem youths then.

After being introduced to Allah, The Father by Prince during mid-October 1964 he instructed her about what the Earths responsibilities were.

“First Born Prince was my God, and he taught me,” she recalled. “The Father named me, and it means ‘woman warrior.’ The Father emphasized on educating the Earths because we are the first teachers of the babies.”

Omala would go on to give birth to one of the first Five Percenter offspring when she later got with Medina’s First Born Gykee and had their daughter Gykea. During the group’s formative years the Moons were very close-knit and frequently socialized, planning the development of their families.

“We fought to build this Nation. The Father’s teachings were so simple that even a child could understand him,” she stated. “In the beginning our Gods taught us martial arts.”

Both freely shared stories with younger generations about the group’s formative years, and what those early experiences were like, and always engaged youths in thoughtful dialogues.