Ka’Mauri Harrison, 9, takes fight to stay in school to the Louisiana legislature 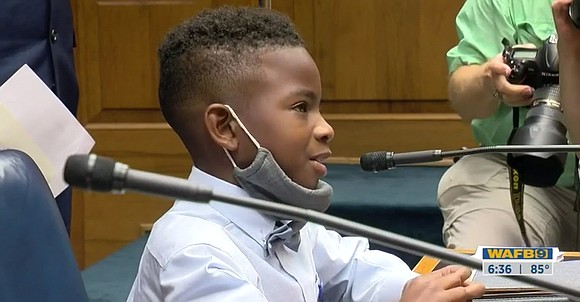 Sitting on Governor John Bel Edwards’ desk is a historic act that creates school policies for virtual learning in Louisiana and allows students who have been punished by their schools to appeal their school’s decision. The Act, which was written by State Rep. Troy Romero (R-District 57) and co-authored by 70 legislators, earned unprecedented unanimous support across the House and Senate during this second extraordinary session. And it all began with the parents and supporters of Ka’Mauri Harrison fighting to appeal an elementary school’s decision to expel him.

When the Nyron Harrison and Thelma Williams of Harvey, La., made the decision to keep their five children in virtual learning throughout the coronavirus pandemic, they did not realize that they were opening their home to the review of the Jefferson Parish School System.

Nine-year-old Ka’Mauri Harrison was expelled for having a BB gun visible in his bedroom while he attended virtual classes. According to his teacher’s report, Harrison was completing a test during a virtual class when his younger brother tripped over the toy near him. He picked it up and placed it near his laptop and the teacher saw the barrel of the toy gun. She reported it to school officials who suspended the boy and recommended him for expulsion. Louisiana has a zero-tolerance law for weapons on school grounds and the Jefferson Parish School System upholds a “Weapons on Campus” policy.

At his school hearing, an official declined to expel Harrison but still upheld his six-day suspension. Harrison was upset.

“They are treating it as if he brought a weapon to school,” said his father.

His parents said the school violated their privacy rights and denied them due process. They are suing the school system and is seeking damages for “mental pain, suffering, anguish and embarrassment, humiliation and loss of self-esteem, future counseling and tutoring and lost income,” according to the suit.

On the day the story was published in the New Orleans Advocate newspaper, Dillard University president Walter Kimbrough PhD penned a letter to the school district and media. He questioned if the school system had adequate policies to address incidents like this to determine where school functions or school grounds end during virtual learning. He admonished the Jefferson Parish public schools superintendent to revoke the punishment, update school policies to reflect changes to virtual environments, and apologize to Harris. School Board member Simeon Dickerson said the punishment didn’t fit the offense and also urged the superintendent to reconsider. As of today, Superintendent James Gray has not reconsidered.

Kimbrough often speaks against the over criminalization of Black boys, so it is consistent of this HBCU leader to spot this situation and proactively attempt to prevent a long-term effect on the fourth grader and his family.

Attorney General Jeff Landry launched an investigation into the situation on the same day of the story. “I have begun investigating this matter and plan to take action in defense of this young man and his family and all families who could suffer the same invasion of their homes and constitutional rights…“It is ludicrous for this All-American kid to be punished for taking responsible actions,” wrote Landry.

State Rep Jason Hughes (D-New Orleans) shared Harrison’s story on Facebook and posted, “During the 2020 Regular Legislative Session, I filed a bill that would completely overhaul Louisiana’s School Discipline Code… The bottom line is we suspend and expel far too many kids in the State of Louisiana, including students in Pre-K and Kindergarten. This is not accomplishing anything meaningful. Rather, these actions are causing our kids to fall further behind and placing them on a destructive path, rather than a path to prosperity. Louisiana MUST do better! I invite any parents, teachers, students, and members of the public to join me in addressing this problem and working toward a meaningful solution!” The Harrison family has done just that.

On Oct. 6, a judge signed a temporary restraining order enjoining the Jefferson Parish School System from performing a social work assessment on Harrison or any other acts of retaliation, his family stated on their GoFundMe page. The Harrison Family said they hope raise enough money for Ka’Mauri’s legal defense to appeal the school’s decision, clear his record of an “on-campus weapons violation, and support the family as needed.

Because of an over-reactive school expulsion, the Harrison family has become active advocates for fair education policies even in the midst of their own financial challenges. They have been caught in a whirlwind of rules and policies, even while KaMauri returns to virtual instruction.

With the help of New Orleans attorney Chelsea Berner Cusimano, the Harrison family went to the State Legislature on October 7 to encourage the Louisiana House Education Committee to pass House Bill 83 and review student disciplinary laws and policies especially considering the new virtual learning environment. Representatives applauded Harrison before unanimously voting to advance the bill which they renamed the “The Ka’Mauri Harrison Act.”

In an open letter to legislators, the Jefferson Parish School superintendent and board members urged legislators to reject the bill stating that the bill will have serious and wide-reaching implications for school districts. They said school boards statewide would be overwhelmed with suspension appeals.

“From what I’m looking at — just by reading and what I know — it seems like this was way overboard and this thing should have never even gotten to this point. “This kid should have never been recommended for expulsion over something like this with a BB gun,” said Sen. Kirk Talbot.

On Oct. 19, the Senate Education Committee also unanimously voted to advance the Act to the full Senate for final passage which it received with 35 votes, unanimously, on Oct. 20.

“We have the legislature on our side… Had this not happened these children would have been left with no recourse,” said Cusimano.

If signed by the Governor before the legislative session ends on Oct. 27, the Ka’Mauri Harrison Act will become a law in Louisiana and school districts will have to write policies specifically for online learning.

The law would allow Ka’Mauri Harrison, and every student punished since schools shut down in March, to appeal all the way to District Court. It gives families more options to appeal disciplinary decisions, including a secondary review if they’re recommended for expulsion. This will allow students the opportunities to clear their school records as a result of a second appeal.