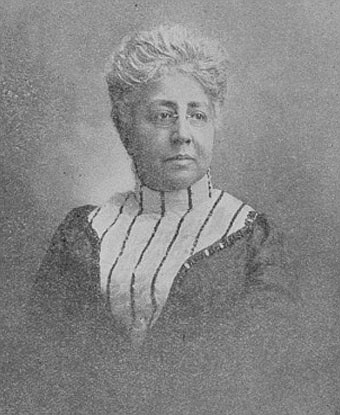 Few books chronicling African American history are without at least a mention of Josephine St. Pierre Ruffin. Undoubtedly, even for a woman of her prominence, especially at the turn of the 20th century, some digging into the journals and newspapers is required to gather her full significance, her excellence.

Here is how David Levering Lewis depicts her in his first volume on the life and legacy of W.E.B. Du Bois. He begins by citing her “beehive of white hair and grand ways” and that she was “more than a society hostess. Her politics were militant suffragette. She numbered among her white acquaintances Julia Ward Howe and Lucy Stanton. She thrust herself at the center of the national women’s club movement, representing a network of African American clubwomen at national conclaves, whether the ladies from the South liked it or not.”

Du Bois added that she was often a loud, outspoken delegate at such conclaves, so much so that at the 1900 Milwaukee General Federation of Women’s Clubs that the Chicago Tribune called for her to be gaveled into silence. “Mrs. Ruffin belongs among her own people…among us she can create nothing but trouble.” But like the late John Lewis, Ruffin was the creator of nothing but “good trouble.”

Born in Boston, Massachusetts on Aug. 31, 1842, Ruffin was the child of John St. Pierre, of French and African descent from Martinique and a mother, Elizabeth Matilda Menhenick from England. Her father was a successful clothier and founder of Boston Zion Church. Ruffin attended public schools in Boston for a period of time but her parents eventually enrolled her in private schools in New York City to avoid Boston’s segregation policies. Later, after Boston ended its segregation, she attended Bowdoin School, not be confused with Bowdoin College.

She was 16 when she married George Lewis Ruffin (1834-1886), who was the first African American graduate of the Harvard Law School. He had several other Black firsts on his resume, including election to the Boston City Council and as a municipal judge. Early in their marriage they lived in Liverpool, England but soon returned to Boston with a house on the West End of town.

The couple were a dynamic team, both actively involved in the anti-slavery movement. Most significantly, they were key recruiters of Black soldiers to serve in the Union forces during the Civil War, particularly the 54th and 55th Massachusetts regiments. They were instrumental in the Sanitation Commission, which provided care for soldiers stationed in the fields of battle. At the conclusion of the war, Ruffin devoted time and attention to the Kansas Freedmen’s Relief Association, where she helped raise money and clothing for those participants in the movement west called the “Exodusters.”

Besides these activities she was a principal organizer of women’s clubs and supported the women’s suffrage movement, joining Julia Ward Howe and Lucy Stone in the creation of the American Woman Suffrage Association (AWSA) in Boston. Later, Ruffin would be the first African American woman member of the New England Women’s Club that was founded by Howe and Stone in 1868. Ruffin was a prolific speaker and her articles often appeared in The Courant, which facilitated her admittance into the New England Woman’s Press Association.

When her husband died in 1886 at 52, Ruffin used her financial inheritance to launch the Woman’s Era, the nation’s first newspaper published by and for African American women. From 1890 to 1897, she served as the paper’s editor and publisher. The paper was a beacon for women’s rights and was at the forefront of civil and human rights. Out of this activity emerged the Woman’s Era Club that advocated for women, an activity she did with the help of her daughter Florida Ridley and Maria Baldwin, a school principal in Boston.

Ever active on the local and national front, Ruffin organized the National Federation of Afro-American Women in 1895, as Booker T. Washington continued his ascendancy as a chief spokesperson for the race. In conjunction with the Federation, she convened the first National Conference of Colored Women in America that was attended by women from 42 Black women’s clubs from 14 states. The organization merged with the Colored Women’s League a year later to form the National Association of Colored Women’s Clubs (NACWC). The redoubtable Mary Church Terrell was elected president and Ruffin served as one of the organization’s vice presidents.

Ruffin’s affiliation with Terrell and the other women occurred as she was integrating the New England Woman’s Club. That date in Milwaukee cited above when Ruffin raised her voice grew from her discontent about a rejection from the conclave because she didn’t have the proper credentials. When she refused to accept admittance given her membership in two white clubs she bolted from the proceedings. The incident provoked an outcry from Black publications, all of whom were in support of Ruffin.

In 1903, the New Era Club folded, but Ruffin continued her dedication to women’s rights and soon lent her prestige and influence to the founding of the NAACP, becoming a charter member. She, in association with other former members of the New Era Club, co-founded the League of Women for Community Service, which is still active today.

Despite her active career in social and political events, she had five children to care for—Hubert, later an attorney; Florida, a school principal and a co-founder of the Woman’s Era; Stanley, an inventor; George, a musician; and Robert, who died in his infancy.

In 1995, she was inducted into the National Women’s Hall of Fame. Ruffin died at 81 of nephritis at her home in Boston in 1924 and is buried in Mount Auburn Cemetery, Cambridge. She has been memorialized at several locations in and around Boston.