Labor strikes back: Officials push back against the Trump election narrative 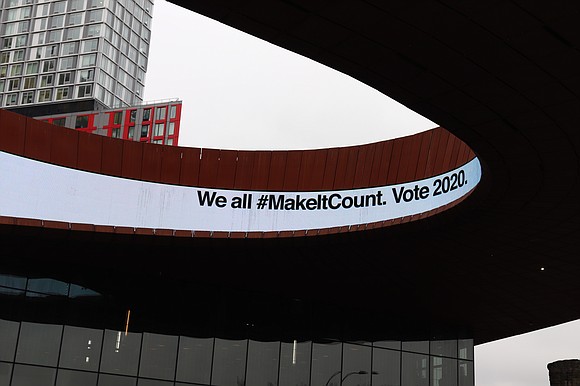 The 2020 presidential election will have a profound effect on the direction of the country. Unions could feel the brunt of its results for a decade.

But no matter the result, labor has collectively said they won’t take any setbacks laying down. 32BJ President Kyle Bragg said that voters deserve to have their votes counted. His constituents voted for a $15 minimum wage and health care for all and have endured “needless” deaths of frontline workers who have continued their labor during the COVID-19 pandemic.

“The essential workers of 32BJ SEIU and our communities stood strong and united this election season,” stated Bragg. “Even in the midst of the pandemic and deliberate attempts to make it harder for many of us to vote—especially Black and Brown communities— voters have done the job and turned out in record numbers this time around. Every single one of those votes matters. Our nation has seen hardship before, yet, we have still held elections and ensured a peaceful transfer of power, even in times of great crisis. 2020 will not be any different.

“We need to give state election officials the space to do their jobs and count every vote,” Bragg continued. “The vote count will determine the winner of this election, not politicians declaring victory. When the president has repeatedly announced that he will refuse to accept the results of this election, he has shown a basic misunderstanding of what makes our country great…”

Earlier this year, the AFL-CIO released a report titled “Death on the Job: The Toll of Neglect.” Their report presented data that revealed that the main contributor to the gravity of the public health crisis lies on President Donald Trump’s administration’s failure to act on said crisis. The report also pointed to the Trump administration’s weakening and rollbacks of regulations on top of his resource cuts to the Occupational Safety and Health Administration.

With union leaders believing that no one in the current White House will protect them, Biden took a narrow lead against Trump in battleground states like Wisconsin and Michigan (states with significant union populations) going into Wednesday. AFL-CIO President Richard Trumka said democracy is rising in America.

“Despite the worst pandemic in a century, voters came out in record numbers to exercise our rights as citizens, and now those ballots must be counted. Joe Biden’s growing national lead reflects a country ready to turn the page on the dysfunction and division of the Trump era, and we are confident that when all the votes are counted, the Electoral College will render the same verdict.

“Simply put, voters must decide—not courts, not legislators and certainly not one of the candidates,” said Trumka.

“As leaders in business, labor, and the faith community, we celebrate the record turnout this election has produced,” read a joint statement. “With voting ending today, it is imperative that election officials be given the space and time to count every vote in accordance with applicable laws…Although we may not always agree on desired outcomes up and down the ballot, we are united in our call for the American democratic process to proceed without violence, intimidation or any other tactic that makes us weaker as a nation.”

In 2017, Trump revoked an order by former President Barack Obama that would have guaranteed that companies with federal contracts comply with 14 different labor and civil rights laws. Obama’s “Fair Pay and Safe Workplaces” order was the result of a government investigation revealing that companies who routinely violated these orders were still being awarded with government contracts.

Leng Leng Chancey, the executive director of 9to5, National Association of Working Women (a national organization fighting for economic equality in the workplace for women of color), said the current administration can’t flout the law just because they didn’t get their way.

“Record numbers of voters have turned out in force to vote, braving long lines, disinformation tactics, voter intimidation and a public health crisis,” said Chancey in a statement. “Now, their voices must be heard and all their votes must be counted. We demand a fair process so the will of the people prevails. Our Constitutional right to vote is the bedrock of our democracy. In this country, every vote counts no matter party affiliation, where you live or who you are. The people pick our leaders—our leaders do not pick their voters.”

Office and Professional Employees International Union President Richard Lanigan called Trump out for poisoning the waters of the electoral process stating that his team will “do all they can in the courts and on the ground to throw out votes, attack ballot counters.” Lanigan also stated that Trump wished to intimidate people who want the election decided by the people.

“Though these are uncertain times,” stated Lanigan, “we have confidence not only in the hard-working vote counters but the entire labor movement in our shared fight to ensure our already fragile democratic institutions remain sound.

“We must stand up against all attempts to undermine the fair and democratic election process and ensure every vote is counted and the voices of all Americans are heard,” Lanigan concluded.