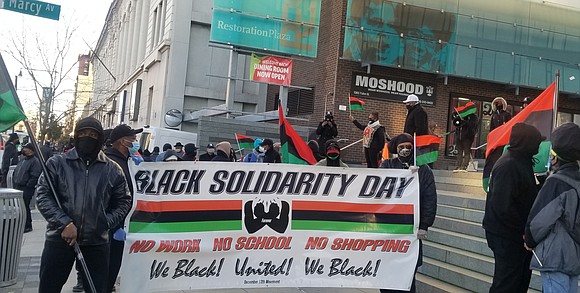 Tuesday, Nov. 2, 2020 was the 51st anniversary of Black Solidarity day. A day created by the late Dr. Carlos Russell who was inspired by the satirical play “A Day of Absence”' by Douglas Turner Ward.

The day began with Brooklyn activists of the December 12th Movement being set up on the steps of Restoration Plaza playing politically conscious music and excerpts of Malcolm X speeches.

At 3 p.m. community members along with several organizations such as The Ahnkhsgiving Collective, Groove Phi Groove, Black Lives Matter Brooklyn and Black Men Run were a few of the organizations represented just to name a few.

The march began going south bound down Harriet Tubman Avenue where the masses chanted “What’s today? Black Solidarity Day,” and “No Work, No School, No Shopping,” drawing the attention of passersby who honked their car horns and threw up Black Power fists of solidarity.

The first stop on the march was 10 Claver Place, an address formerly belonging to the Black cultural institution known as The East, an institution visualized by the late and great educator and activist Jitu Weusi, and brought to life by the contributions of many other cultural warriors.

Activist Omowale Clay stated that The East symbolized, “The legacy of us being African and our rejection of the culture of this country, the creation of our classical music that we created—jazz—and the reemergence of who we are as an African people was birthed right at The East.”

He then went on to name some of our great jazz legends such as Pharoah Sanders, who frequented The East, and then concluded his speech with the importance of Black self determination before introducing one of the sons of Jitu Weiusi, brother Kojo Campbell. Kojo reiterated that our fight is a fight for self determination, self agency and community control. “Something basic we are asking for—that our oppressors should not be teaching us, nor should they be policing us. It’s a simple matter really, it’s insanity to accept the conditions of a system where your oppressors are policing and teaching you.” He then concluded by stating that, “WE will be out here until WE control our conditions.” The stop at The East then ended with a cultural presentation of some upbeat spoken word poetry by a young member of the Ahnkhsgiving Collective.

As the march continued, the masses made their way to Frederick Douglass Square. The masses began to chant a new slogan, “Who’s got the power in these streets?” “We got the power in these streets!” “What kind of power?” “Black Power!” The chants echoed down Nostrand Avenue, engaging the youth on the streets, and they joined in the chant in unison. As the march came to a close the group of at least 100 people gathered at the newly renamed Frederick Douglass Square in front of the people’s cultural institution known as Sista’s Place where the crowd heard from Keron Alleyne of Operation Power, Anthony Beckford, president of Black Lives Matter Brooklyn, and Malik Callender of The December 12th Movement. All of whom reminded the masses that we were here for the reason of solidarity, “Solidarity amongst each other, against our common enemy, that enemy being white supremacy and capitalism and all of who represent the two.”

As the rally concluded with masses shouting out “Black Power for Black People,” people were reminded of the virtual rally that would continue in the evening as Black Solidarity Day came to a close.

A webinar which was also hosted by The December 12th Movement in collaboration which several other organizations and individuals, such as the Blue Nile Passage Youth Program, UNIA, The Coalition of Black Trade Unionist, NAKO, The Nation Of Islam, Council Member Inez Barron, Assemblyman Charles Barron, Dr. Molefi Asante, Lisa Muhammed, and Brother Yusef Salam of the Exonersted 5 to name a few. The virtual rally opened up with activists Omowale Clay and Lenora Sharpe, who discussed the importance of continuity within the struggle as a new generation is being trained up to continue the ongoing work of resistance and solidarity.

Throughout the program the message was clear as emphasized by Clay, that “Unity is our aim, and victory is our destiny, and the way in which this will be done was through our solidarity, in the spirit of Black Solidarity Day, it will be through the collective withdrawal of our most precious resource, our labor. The time is NOW for the Black Nation to move toward a general strike. Black Labor is key to Black liberation! Long live Black Solidarity Day, let us work together for a new reality for Blacks in America, Africa and the world!”