Celebrating the life of Miguel Higgins 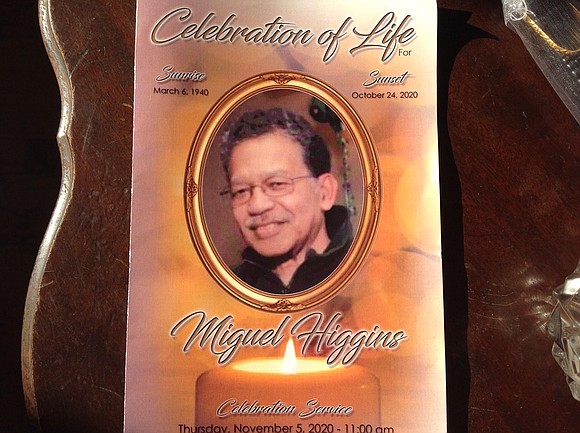 A close-knit circle of 25 family members and friends gathered Thursday, November 5, to commemorate the illustrious life of former Harlem resident, Miguel Higgins, during memorial services in Willingboro, N.J. After enduring several health issues over the previous couple years, he joined the ancestral realm Saturday, October 24, at 80 years of age.

Born March 6, 1940 in Humacao, Puerto Rico, he also had roots in the U.S. Virgin Islands and Antigua. He migrated to Harlem, New York in 1952 to live with his mother, Rosa Agosto, who had relocated here a couple years earlier, then sent for him and her sister, Antonia, after getting established. He attended local public schools prior to graduating from lower-Manhattan’s Chelsea Vocational High School in 1958. He resided on East 113th Street before the area was razed to make way for the Thomas Jefferson Houses, at which time he and his mother moved to the newly erected Robert F. Wagner Houses, on East Harlem’s Paladino Avenue and 120th Street, in 1958.

He was a big fan of the doo wop, rhythm & blues as well as soul music which was thriving in Harlem then and regularly attended the world famous Apollo Theater on West 125th Street to witness some of his favorite artists, namely Jackie Wilson, perform live. He continued this trend throughout his twenties. His competitive edge was sharpened while playing cards, dominos and table tennis with his few friends. As an avid sports fan he supported all area major sports teams year-round.

After graduating from high school he enlisted in the U.S. Air Force, specializing as a Cryogenic Technician and Civil Engineer for 13 years prior to cross-training to become a Refrigeration/Air Conditioning Technician, doing so for an additional 13 years. Throughout his military tenure he navigated the globe, visiting such far off places as England, Japan and Iran, just to name a few. He earned numerous distinguished military awards, including an Air Force Commendation Medal, multiple Air Force Good Conduct Medals and a Vietnam Service Medal; and was promoted to the rank of Master Sergeant before retiring from the Air Force in 1984 after 26 years of honorable service. He accomplished one of his life’s ambitions in 1982 when he purchased a house in Willingboro, N.J. with his wife and children.

After a year of working independently, in 1986 he worked as a civilian at McGuire AFB, at the same shop where he had previously been the NCOIC. He remained there for another 26 years as an HVAC technician until retiring in 2012.