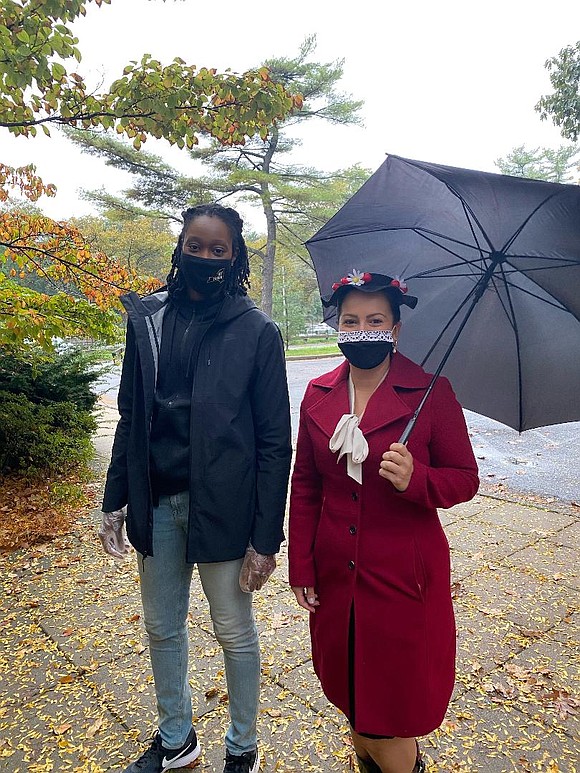 When Assemblywoman Catalina Cruz first got a message from basketball star/Queens native Tina Charles, she was a little starstruck. Charles wound up joining Cruz at an event at the Queens Museum Oct. 28 to distribute diapers and food for the Queens-based Together We Can Community Resource Center, which was created to meet the needs of local resource-deprived families.

“The way Tina came to us is MSNBC did a piece on the food pantry that I was running out of my office during COVID and Tina reached out to see how she could help. Ultimately, we thought that the best way to capitalize on Tina’s support was to have her partner…with the food pantry that we partner with, Together We Can, because it has a much wider reach,” said Cruz.

Charles, who played for the New York Liberty from 2014–’19, was traded to the Washington Mystics shortly before the 2020 WNBA season. In her illustrious career, Charles has won two NCAA titles at the University of Connecticut and two Olympic gold medals. She was the number one pick in the 2010 WNBA draft and league MVP in 2012. Through it all, she has maintained her love and support for Queens.

“I donated half of one of my WNBA pay stubs to [Together We Can] to provide food and diapers to the community of Queens,” said Charles. “We did this at the Queens Museum, which I grew up going to when it used to be an ice skating rink…Having this opportunity to give back meant the world to me.”

Charles was medically excused from the 2020 WNBA wubble season due to extrinsic asthma. She stayed engaged with social justice issues. “I’m thankful for the Washington Mystics for curating opportunities for me to lend my voice with different panels,” Charles said.

The time off, a rarity for Charles, has allowed her to spend time with family and friends. “I’ve been able to reflect and just be still,” she said. “I believe contentment begins with fewer wants and being humble. COVID has shown us how abrupt life can be and how much we need each other to survive.”

Meeting Charles was a thrill for the people at the event. “It was very meaningful, not just for me as their representative, but for the children and their families,” said Cruz. “Even for those who may not have known who Tina was, they understood and felt her impact, the kind donations that she gave us.”

A longtime advocate for #BlackLivesMatter, Charles greatly appreciated the WNBA’s commitment to social justice this summer, particularly Say Her Name. For now, Charles is staying close to home and observing social distancing. She is working out for a return to action.