Hoppie ready to bring it in senior season 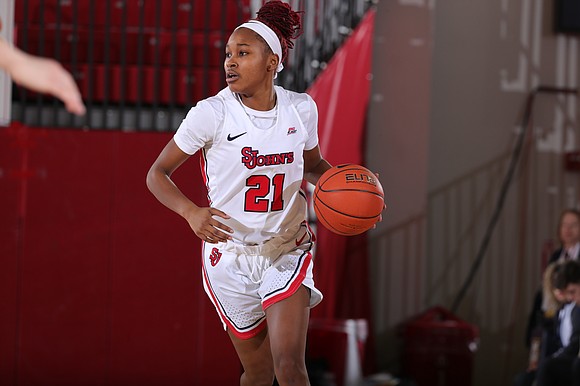 St. John’s University senior guard Qadashah Hoppie agreed that it seems like not long ago that she emerged on the scene as a hotshot freshman. “Everything went fast, but it’s been great being at St. John’s and seeing the growth from my freshmen year,” said Hoppie. “I’m excited to finish with a bang in my senior year.”

Named to the Preseason All-Big East Team, the Staten Island native said she and her Red Storm teammates are focused on their season opener versus St. Francis College scheduled for Nov. 25. Although it has been announced that there will be no spectators due to COVID-19 restrictions, Hoppie said it doesn’t dim their enthusiasm.

“We’ve been waiting for this time the whole summer, just waiting to see if we would be able to play this year, so we’re really excited and happy to have a start date and something to push forward to,” said Hoppie. “We’ve been practicing, going hard. As these weeks close in, we’re just finetuning things and trying to get better.”

When St. John’s cleared its campus in mid-March, Hoppie returned to her family. In anticipation of stationing in place, the strength coach for women’s basketball prepared simple workouts that the players could do at home. Those exercises along with some running of Staten Island’s hills kept her busy. She had a basketball hoop, so she could do a bit of shooting on her own.

After about two months, she returned to her off-campus apartment in Queens and was able to workout a bit and keep herself in shape until she was able to begin training on campus in late July. Hoppie, a business management major, said as senior leader on the team it’s important to make sure there’s a sense of unity.

“We have to be extra safe and extra cautious, and that may be hard for some people,” Hoppie said. “As far as the other side, we have a lot of freshmen and sophomores, so continuing to lead them so they can become leaders once they cross over to that junior/senior world.

“Keeping everybody together because at the end of the day it’s just going to be us in those gyms,” she continued. “We’re not cleared to have fans, so we have to maintain a certain togetherness.

“In the beginning of the season, it’s going to be about focusing on our team, our chemistry and building up enough chemistry so that by the time Big East Conference comes around [the Red Storm’s Big East opener is Dec. 4] and further on into playoffs…we’re ready.”