LaToya Meaders says pandemic or not, ‘We must feed those in need’ 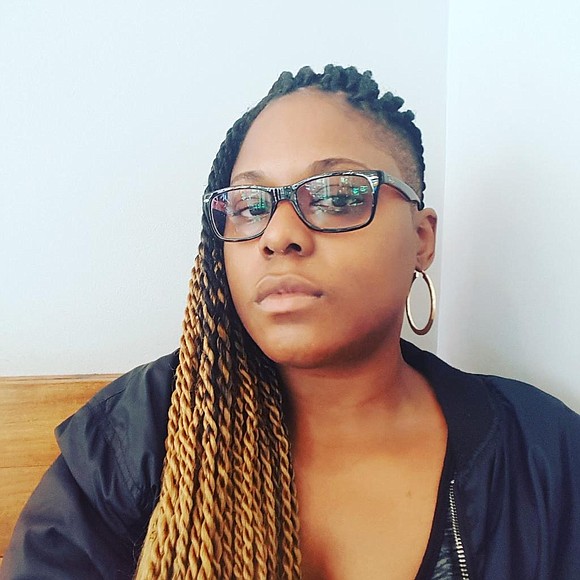 Providing sustenance to underfunded people is everything. Refueling targeted communities amidst one of the world’s greatest collectively experienced health challenges this century…is something else.

Being four months pregnant didn’t slow LaToya Meaders down; working in the beginning of a deadly pandemic as it ravished the nation and world did not swerve her determination either.

All Meaders saw was the anguish and fear disrupting the lives of members of the Brownsville community in which she worked.

Alongside her husband Chef Rodney Olufemi Frazer, Meaders developed a heavy routine of feeding the masses which went from 200 meals a day for the pre-COVID community fare at

Brownsville Community Culinary Center—to 2,000 COVID-era dinners on contracts, with private and public groups, and with organizations such as City Harvest.

Meaders is the director of Operations and Catering and Events, however, she stated, “My personal background is in electrical engineering and construction, culinary arts, hospitality management.”

Chef Frazer who was “born and raised in West Africa, grew up in the D.C. DMV area,” said his flavor profiles and menus are introducing the experiences and possibilities of the world through international victual fusion. Through his dishes: like roasted turkey with a suya or cajun rub; or his mango reductions, his stylings on his egusi, his barbeque, and his unique use of Caribbean and West African spices on Southern cuisine create his “African Diaspora with a Southern twist” plates.

“It is about exposure,” he said of both his clientele, and his eager students. “I need these young people to see outside of Brooklyn, outside of the United States,” and he took students to Denmark.

“My mission here is to have young people understand that they have access to so much, but they don’t maximise it…and I want them to ask questions that we never asked.”

The fear and threats of the coronavirus motivated, rather than curtailed, the twosome and their dedicated staff. Bringing hope, recognition and gratitude was this massive COVID-19 response initiative in the Brownsville and East Brooklyn area. In March Collective Fare at the BCCC & Universe City in collaboration with BMS & Teens for Food Justice and M.E.L (Men Elevating Leadership) mobilized to utilize the 10,000 square feet location at 69 Belmont Avenue and “create a food access point for those in need in our community with donations from City Harvest, NYPD, ReThink, F.A.R.M, AGAPE Food Rescue and a network of mutual aid groups.” Meaders said, “My partner and I actually started out as educators and catering directors with the Brownsville Community Culinary Center. This space was built in 2016. The BCCC is a 40-week, nonprofit, stipend paid, culinary training program, and operated from 2016 all the way to June 2019.”

Frazer and Meaders also operated a catering faction there too, she said.

BCCC closed in June 2019 due to financial constraints, but as we sat in the Brooklyn location, she added, it was “ripe for a change” and “in an effort to restructure.”

Then in August 2019, “Roddy and I launched Collective Fair…and we considered what would it look like to create jobs within Brownsville for Brownsvillians, and so we started out with catering out of that kitchen. And before the COVID-19 pandemic and the stay-at-home order, we were about to launch this cafe kitchen, and that same week that’s when we got the stay-at-home order. We’re sitting here just getting all these phone calls from catering clients who lost $150,000 worth of venues, and we had a fridge full of food.”

They had themselves a full service catering company with a roster including: tech companies, weddings, special occasions, corporate catering and school contracts.

“We had a fridge full of food, and we were trying to figure what is the next step. We were petrified, watching the world; our clients were calling us canceling, or postponing events, but then the one thing we kept hearing was how this is affecting our elderly. It was very profound, startling us. They should be safe. So we started developing meals, healthy meals, so they can stay home and not venture out.”

The community banded together immediately. Activist Danny Goodine from Man Elevating Leadership helped identify and service the shelters and the senior centers. Meaders noted, “He and other community partners helped deliver the food to those in need.”

Since their launch of Collective Fare at the BCCC they state that they have, “prepared 9,000 meals and Universe City/BMS have provided 13,000 bags with fresh produce and pantry items in Brownsville and surrounding communities.”

So, Meaders talked about introducing alternatives like bok choy, architecture, marketing during a pandemic…but she buried the lead, when she casually announced 20 minutes into the Amsterdam News interview: “I was pregnant with my son Olufela in March.” Come again?

“Yeah, I had a baby in June…I didn’t know I had to lead with that! I was petrified to go into the hospital during COVID, I had doctors’ appointments and everything. I’m a whole COVID MAMA!”

Meaders shared that she is in her 40s with a 20-year-old, and now a newborn.

“I was already a germaphobe, so I was cleaning everything. We live in Queens, and I remembered Sars and the swine flu…so when we heard about what was happening in China, I already got my masks in December. I didn’t know how deadly it was, but I knew I had to be prepared. I had to be very careful about how I moved.”

But even at the height of the announced coronavirus crisis, when the death toll was still climbing, Meaders said that not coming in from Queens to Brownsville, Brooklyn everyday never crossed her mind.

Actually getting emotional she stated adamantly, “That was not an option, I had this overwhelming response after hearing about people who didn’t have food. Particularly the elderly. Like nobody cared. Me and Rodney just couldn’t…”

She explained, “I grew up in Park Hill, Staten Island. You know poverty. You’ve seen it, you’ve smelled it, you’ve tasted it. You’ve lived it. It’s different. It makes you driven to, you’ve got to take good care of yourself, you’ve got to take care of yours…which could almost lead to violence in order to get from that. Rodney came from D.C.…not the beautiful row houses, but when it was rough. His Mom comes from Sierra Leone, and she remembers the Ebola crisis. So with all of this knowledge of what is happening, and what can happen…we just sprung into action.”

Lessons in the time of COVID?

“I think COVID has done a great many things including highlighting cracks in the system as far as food access and how food moves around, and is processed…it was broken,” Meaders said pointedly. “When truck drivers were getting sick; farmers were dumping milk because they couldn’t sell it…but then you have a whole demographic of people who are over here starving. And so we sat down as a team and started designing other ways, and identifying access points to getting around the situations that we were coming against.

“I loved the way all the organizations came together. It was a real sense of community. It was absolutely beautiful.”

Always set up for a new normal comeback, BCCC trainees are catering and hospitality focused students; 30% of students come from The Ville. As for the participant-run cafe, “A good majority of our workers at Collective Fare come from the neighborhood.” They have 25 workers, she said, with 60 pre-COVID.

There’s a set menu, a set bakery, and two chefs. Meaders said, “The catering menu allowed us to be a bit more adventurous.”

Then there is the community cafe and culinary school modern interior with conversation-starter creative art and design, some by local artists.

With community food banks and pantries and organizations such as City Harvest operating with stretched resources, Meaders said they are in it for the long haul, as they continue to feed the community and work with local farmers, community gardeners, and traditional food providers such as companies and supermarkets.

“We will not see our community go hungry. We are here to serve the people of Brownsville, and beyond.”

Chef Rodney and Danny Goodine were among the Brooklyn COVID Heroes honored outside Borough Hall, Brooklyn by Borough President Eric Adams this week alongside a virtual Dr. Anthony Fauci, director of the National Institute of Allergy and Infectious Diseases.

Meanwhile, Collective Fare is preparing for the Thanksgiving Day community push with their really delicious and affordable 2 for $20, 6 for $60 offerings. For more information or donations, please visit lmm@collectivefare.com.