With Logan Ryan as inspiration, the Giants put themselves in playoff contention 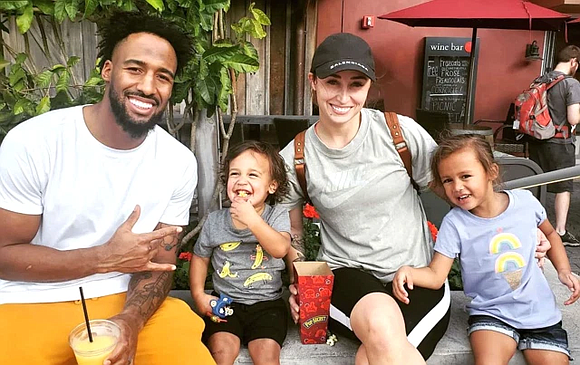 Giants defensive back Logan Ryan played with a heavy heart and the visceral support of his teammates on Sunday. With a collective spirit, the Giants’ predominance over the Washington Football Team has them implausibly in a favorable position to win the NFC East division despite having only two wins in nine games heading into a pivotal Week 10 matchup this Sunday against the Philadelphia Eagles at MetLife Stadium.

The Giants’ 23-20 victory over Washington last Sunday at FedExField in Landover, Maryland, was their second win against the 2-6 Football Team this season and their fifth straight dating back to Dec. 9, 2018. Point of fact: Washington is the only team the Giants have beaten on their schedule since taking down the Miami Dolphins last Dec. 15.

The win came in the midst of Ryan’s heartbreak and gratitude. Last Wednesday morning, his wife Ashley underwent a possible life-saving emergency surgical procedure to stop internal bleeding caused by the rupture of her fallopian tube as a result of an ectopic pregnancy.

The 29-year-old NFL veteran, who met Ashley when they were both scholar-athletes at Rutgers, received a text message from Ashley after midnight on Monday as he was leaving MetLife Stadium following the Giants’ 25-23 loss to the Tampa Bay Buccaneers. Ashley was in Florida to vote in-person in the presidential 2020 election.

She alerted her husband that she was having persistently intense abdominal pains. After Ryan consulted with Giants trainer Justin Maher, he was advised by Maher to urge Ashley to go to a hospital immediately. Tests revealed an unexpected pregnancy. Unfortunately, Ashley and Ryan’s fetus did not survive. They have two other young children, Avery and Otto.

“Obviously, there’s a story behind everything,” said Ryan shortly after facing Washington. “Extremely grateful to the organization and to my wife. She’s a fighter, to not lose her there in that situation is very fortunate.

At 2-7, the Giants are in last place in the division but have only one less win than the first place Philadelphia Eagles who are 3-4-1. Washington is in the second spot and the 2-7 Dallas Cowboys are in the third based on their 37-34 win against the Giants in Week 5.

The Giants’ return matchup with the Eagles is crucial to their hopes of winning the division. A deflating 22-21 defeat to Philadelphia three weeks ago now has them needing a victory to avert the Eagles holding the primary head-to-head division tie-breaker with a second win.

“Throw the record away, it’s irrelevant,” said Giants head coach Joe Judge on Sunday regarding facing the Eagles. “It’s going to be a big game for us no matter who we play…

“Look, we’re just trying to go 1-0 every week. I’m not posting in front of my team what the record is for the season to be completely honest here right now. That’s the last thing we should care about. We have to worry about day by day and week by week making constant improvement as a team and moving in the right direction.”

The incrementally rising Giants defense is a reflection of Judge’s philosophy. They stopped Washington on their final two offensive drives to preserve the victory. An interception by safety Jabrill Peppers at 2:18 of the fourth quarter followed by a pick by defensive back Logan Ryan with 1:15 remaining ended what would have been a movie-worthy comeback led by Washington quarterback Alex Smith.

On Nov. 18, 2018 playing against the Houston Texans, Smith experienced one of the worst injuries in NFL history. Smith had a devastating break of the tibia and fibula in his right leg. A subsequent infection nearly led to the amputation of Smith’s leg. It was considered to be a career ending injury, but this season he has remarkably returned to the field.

On Sunday, Smith ironically replaced Washington starter Kyle Allen after Allen was unintentionally hurt by Peppers, causing a dislocation and fracture of his left ankle. Smith admirably brought Washington back from a 20-3 halftime deficit but the Giants’ defense wrote the final narrative.